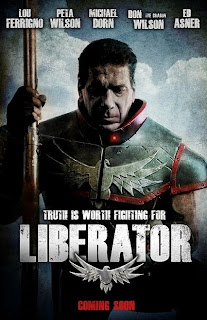 Growing up, everyone remembers Lou Ferrigno in the iconic green skin as The Hulk, a massive superhero, fueled by anger. In Liberator, Ferrigno plays disgraced military vet Ed Migliocetti, who got his team mate killed on a mission.  Ed was experimented on while in the service, and also has personal issues, a far from perfect hero. Ferrigno looks great and obviously keeps himself in top shape, and a perfect fit for this type of character.

The 19 minute film begins with a comic book page opening detailing the back story, reminiscent, somewhat of the Marvel film openings, but time is spent as Ferrigno is narrating the story behind his character.

Following the initial opening Ed is seen walking through a grocery story in a hoodie and sunglasses trying to maintain a low profile. Shouts of traitor are heard as he sulks through and only a small child in the basket with his mother recognizes him for the superhero he once was. 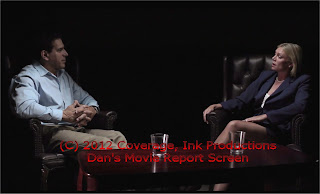 Above Pic: Sultry and dangerous Peta Wilson chats with Lou Ferrigno, is it a set up?

Ed writes a tell all book about his experiences and attempts to expose the truth. Ed chats with "talk show host" Marla Criswell (Peta Wilson), but soon discovers the show is a set up. Incidentally Peta Wilson is a great choice to play this devious character, with understated intensity, smoldering looks, and visceral vocal chords to match.

Without spoiling the rest of the short, Liberator is full of a variety of possibilities, as his old team, Sidewinder (Don -(The Dragon) Wilson and sultry Gaia, (Tara Cardinal) are dispatched to destroy him. Although Sidewinder and Gaia are only in the film for a short time, their presence allows for multiple plot possibilities to open up for future story lines. This is superhero fanboy material all the way and honestly would translate smoothly to either a TV series or a feature length film. 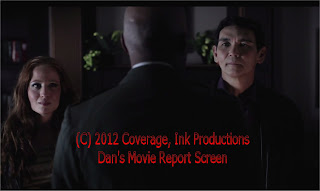 Above Pic: Tara Cardinal and Don (The Dragon) Wilson, prepare to be reactivated to take on The Liberator!


Discussing the quality, the HD print looks polished and professional. All of the actors are well lit, and obviously well rehearsed with proper movements and facial expressions. Liberator is made to impress, and it delivers, giving the audience a taste, of the story and characters, but leaving viewers a desire for more.

By using experienced actors such as Ferrigno, Peta Wilson, Don The Dragon Wilson, Michael Dorn and Ed Asner and talented newcomers like Tara Cardinal, and Jessica Andres, Liberator may have found a niche with younger and older fans alike. Jessica and Tara are talented ladies and definitively ones to watch for the future. Jessica plays Ed's daughter Sonya. Watch for her appearance, as she also transforms herself to fight along side The Liberator.

Liberator is a fantastic short film with many possibilities for expansion of characters and a variety of possible iterations of the story. Liberator rates a 9 out of 10, one of my top short films of the year!