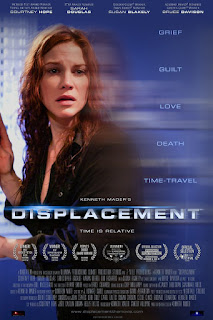 Above Photo: Festival Poster for 'Displacement'


Mind bending reality, a deception of what is real and what is fantasy. 'Displacement' melds film genres. Writer/Director Kenneth Mader has put together his clever masterpiece, and slowly it is rolling out to film festivals nationwide. Recently Dallas had a screening, and for those outside the know, brush up on lead actress Courtney Hope, from our 2014 interview http://dansmoviereport.blogspot.com/2014/07/actress-courtney-hope-exclusive.html


Obviously, this being a preliminary review, there will be no plot spoilers. 'Displacement' is an intellectual movie, with moderate levels of action, but where there is action, it is undulating and evoking angst. Kenneth assembled an excellent acting cast including Sarah Douglas as Dr. Miles. For those unaware who she is, watch the first two 'Superman' films she is Ursa.  Golden Globe winner Susan Blakely portrays Carol Sinclair. Veteran actor Bruce Davison portrays Prof. Peter Deckard.


The acting highlight, however is the lead star Courtney Hope, she reminds me of Noomi Rapace, like a dangerous panther, yet humble and caring at the same time. In 'Displacement' she portrays a young physics student named Cassie Sinclair. Cassie must reverse a quantum time anomaly and solve the murder of her boyfriend.

Cassie moves through the film searching for answers, from physics, reality, and time shifting symbolic items. Get ready to pay full attention to detail in 'Displacement', as the placement of particular objects is one of the central themes of the film.

Forceful and intellectual, 'Displacement' rocks chasms in time! The film is not for the intellectually challenged, it will create a discussion among viewers long after the credits roll. Why do films have to follow a simple pattern, 'Displacement' blasts outside the realm of normal film structure and falls into the questioning the viewer zone. The 122 minute festival cut,, allows audiences to feel the emotional connection of the characters. Writer/Director Kenneth Mader and his entire crew spent a great deal of time perfecting the character development, and overall sense of mood in 'Displacement'.

Everything about 'Displacement' was top notch, from the editing, to the underlying musical score. This is an indie project with big budget quality, yeah it is that cool. If you like your movies with a twist of time, and a quantum shift, and hate the bland linear structure and neat wrapped up pre-packaged normal Hollywood material get displaced haha! Overall 'Displacement' is highly recommended by Dan's Movie Report and rates a 9 out of 10, a must buy. Actress Courtney Hope, in less than a few years will be accepting worldwide awards for her passion and talent as an actress, mark my words.