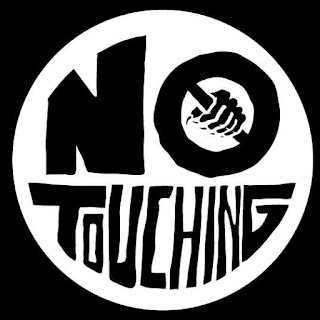 Above Pic: Logo for 'No Touching'

Greetings Dan's Movie Report readers, it is time to take a trip into horror, with the brand new short film 'No Touching', and what an action trip it is! Kickstarted and passion filled, 'No Touching' is a 13 minute wild ride from start to finish, and trust me there is a bunch of touching, kicking, and jabbing! Heidi Moneymaker as Michelle,  Zoë Bell as Jackie, and Jake Busey as Carp walk up to a unique haunted house. In this place, the performers are ALLOWED to touch the guests walking through, but the patrons are not allowed to touch back.

'No Touching' successfully combines the horror/comedy genre with snide remarks from Jake Busey and a small jab from Ms Bell aimed at the size of Ms Moneymaker. Things get creepy when the pair of ladies enter the hauntd house, as only couples are allowed to go in at once. The house is very dark, covered in sheets and really creepy. Have no fear though, unlike most horror films, where women just rush headlong into their impending doom, Ms Moneymaker and Ms Bell, are hardly the delicate flowers ready to fall victim to, dumb guys in silly masks, or even smart and action guys without masks, haha!

Of course there is copious action in 'No Touching',  Moneymaker and Bell are two of the best stunt ladies on earth and they have a distinct brand of balls to the wall action coupled with truculent humor. Upon watching 'No Touching' a few times, I realize that in the event I am in an: A) Dangerous situation B) Around men who like to grab C) In need of sarcasm or quick wit or D) Need mine, or someone elses ass kicked, I will make sure that they are on my emergency call list!

The film takes a supernatural turn, which I will not spoil, and hopefully the Directors/Writers Adam Davis, Will Corona Pilgrim take the concept further, with a series, and or feature film. Everything about 'No Touching is technically sound, the film exudes the proper elements of horror, cool masks, creepy music, action scenes that are quite physical, foreboding music, and a killer ending tune.

Overall 'No Touching' is great, finally women are not the victims in this type of horror film. Heidi and Ms Bell have upped their acting game to match their action prowess, hope to see more films with their witty dialogue. Trapped in a dark house with a bunch of crazies, 'No Touching' rates a 9.5 out of 10. Please check out the Dan's Movie Report exclusive interview with Heidi Moneymaker @ http://dansmoviereport.blogspot.com/2015/09/exclusive-heidi-moneymaker-interview-c.html