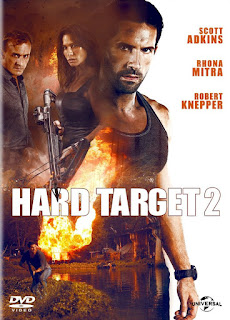 
Greetings valued Dan's Movie Report readers, today we have a brand new action film starring Scott Adkins and Rhona Mitra. 'Hard Target 2' opens with Scott Adkins as Wes Baylor fighting his best friend Jonny Southerland (Troy Honeysett) and the fight ends in the death of his friend in the ring. His best friend's death changes him, he moves to Thailand, and becomes an underground fighter, looking to basically drown away his sorrows in a bottle of booze.

Enter Aldrich, (Robert Knepper) he tells Wes that he has one final fight for him, A payday he cannot pass up. After bumping it up to one million dollars, he is lured into a remote village. The supposed fight actually turns into a human hunt. A bunch of rich people who pay to hunt humans for sport. Apparently the General in Myanmar is also in on it, allowing his own people to be hunted.

Along for this hunt is Sofia (Rhona Mitra). Rhona is good at playing a bad girl. Yeah she looks rough, she is adorable as a rough girl. Not entirely sure why she has a fight with Scott Adkins, but she does, I mean could she really stand a chance?That being said, Rhona has some seriously toned arms, and looks like she could kick some ass, probably not Scott Adkins though. 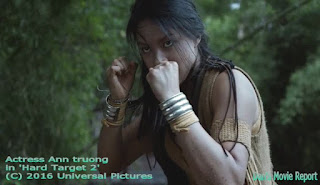 
Along the chase route Wes meets an adorable native girl named Tha (Ann Troung). Ann seems to know the areas to run and to hide. I really think this is a great breakout roll for Ann. She brought heart to an otherwise, tough guy action film. She tries to help Adkins reach the boarder, and attain his freedom. As evidenced in the photo above she is not just window dressing, Ann came to fight as well.

The action is decent, a bit too gun heavy at the end. Watch for a small fight cameo by Thai action heroine JeeJa Yanin. Overall 'Hard Target 2' is a decent effort worthy of a rent, rating a 6.5 out of 10. The film is available in the U.S. September 6th.
Posted by Dan's Movie Report-Danny Templegod at 11:20:00 PM