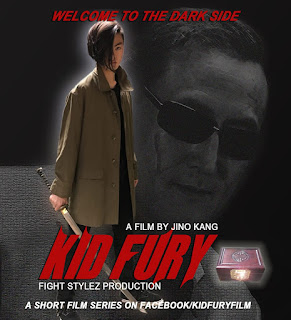 Above: Promo Poster from the official Facebook page of Kid Fury!!!!


Greetings valued Dan's Movie Report readers in a Worldwide Exclusive Post, I have the unique opportunity to post this early review Jino Kang's spectacular new short film Kid Fury! From David A. Fong Photography and Jino Kang Films comes an 18 minute blast of what seems like a cool intro to a story, which eventually will be released, according to Jino on Facebook!

The film also stars Timothy Mah as Jino Kang's (No Spoilers) or spirit haha hard to tell, The cool character for me in this is the mysterious phantom witch played by Virginia Rollowjay. She is a sophisticated, yet dangerous lady with a sleight of hand can unleash a mysterious knock out powder and she can vanish and appear on the other side of a foe!! What I loved about her character is she is an older lady but acts young, full of vim and vigor. Virginia has some cool moves!

Jino Kang has come up with some really creative material for this short as it opens with a young man lying on the street, who is given a jacket, with money and a phone, and instructed to look for a box. Of course there are copious amounts of fighting, but I enjoyed the dialogue as well, I kind of hope a feature film is written for Kid Fury! The story is open ended and can take the viewer in a number of directions can be eventually developed into a horror action film, or a more serious dramatic action film, as the dynamic of Jino Kang's character will be further developed.

The Kid Fury film is presented in 1080p and is clean and clear with solid audio. The background is a bit sparse, as mainly takes place in a building then rooftop, might be cool to take the action outside to the streets etc to give the audience an opportunity to enjoy the action and dialogue in a variety of settings. That said Timothy Ma has to clear the building of thugs to reach The Phantom Witch so it is important to this opening story.

Overall this is a very cool example of what is to come for the Kid Fury series, as for a rating, 7 out of 10, see it! Watch for more exclusives on Dan's Movie Report!