Battleship stars Liam Neeson as Admiral Shane and Rihanna as Petty Officer Raikes. Incidentally, Rihanna's stunt double is none other than the talented Angela Meryl.  Angela also worked as Vivica Fox's double on Kill Bill, and has appeared in dozens of other films. Keep reading Dan's Movie Report for a future interview with this talented stunt lady! In the mean time Check her work at V10 Stunt professional home page @ http://v10stunts.com/
Also www.angelameryl.net

Below is a pic of Angela and Rihanna on the set of Battleship from Angela's Facebook. 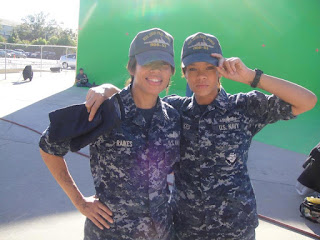 How long were you on the set of the Battleship?

I was in Baton Rouge, Louisiana on the set of Battleship for five weeks.

Did you have to return for re-shoots?

Did you have to train Rihanna for any scenes?

Rihanna was gung-ho about the entire experience. She didn’t need my help at all.

Contrast your training for an action movie like Battleship with a martial arts film like Kill Bill.

For Battleship, I had to learn how to handle and walk with automatic weaponry. Weapons are held differently in the military, as opposed to what we see in movies depicting how weapons are used on the street.
For Kill Bill, training for the fight scene was very intense! For 3 straight weeks I trained with Master Woo Ping’s Bejing Team. It was on a whole different level than what was required or necessary for Battleship.

Were there any stunts that you were surprised Rihanna was able to do on her own?

Rihanna’s an all in girl for sure, but still, they call in professional stunt people to perform the more dangerous stunts. So, no, I was not surprised at all by Rihanna’s peformance. She did a great job! 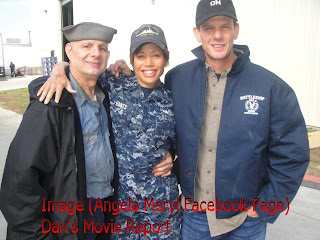 What was the most difficult stunt you had to do on Battleship?

This may sound a little crazy, but I had to stab the alien in the thigh from a certain angle. But the knife kept collapsing. I guess that’s why that scene didn’t make the final cut.

Any bumps and bruises for you or Rihanna during the making of Battleship?

Sure, there’s always some minor bumps and bruises, which comes with the territory. But there were no major injuries for me on the set of Battleship, thank GOD!

The last day on the set, after the director declared “That’s a wrap,” I went over to sign off with Rihanna and tell her that I enjoyed working with her. In a girly kind of way she squeezed my left boob and told me, “You part of the crew now!” In total shock, I screamed and laughed in shock of what she had just done. We all laughed like crazy!

Haha, Thanks Angela for doing the interview I wish you success on Battleship and your other upcoming projects.