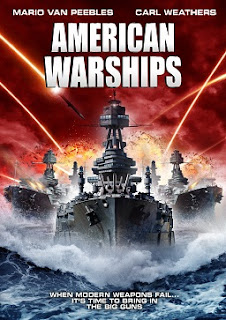 Above Pic: Updated Poster For American Warships (C) 2012 The Asylum

Before I actually start this review I will prove I do NOT work for The Asylum by submitting a link to a review of one of their other films Amityville Haunting.  I gave that particular flick a very negative 2 out of 10 rating http://dansmoviereport.blogspot.com/2011/12/amityville-haunting.html

I base my reviews on my honest opinion of each film they send to me as I am on The Asylum official mailing list. Someone working for the company would never give a film this low of a rating. I do, however, respect the efforts of The Asylum as they are afforded limited budgets and a short, sometimes only 2 week shooting schedule, with many in-experienced actors.

The lawsuit with the mega-blockbuster Battleship Movie has been well publicized, and The Asylum was forced to change the title from American Battleship to American Warships.

On to the Review, I have decided to keep it very brief as the film Airs on SyFY Saturday night May 19th at 9pm EST, I do not want to spoil the plot points.

American Warships represents a technological leap for The Asylum, the CGI in this film is very good, by low budget standards of course, not distracting at all. I am basing this strictly on lower budget standards, as many asylum films and other lower budget films have much poorer often times wrenching 80s technology CGI.

The acting is acceptable, not going to win awards, but Mario Van Peebles (Capt. Winston), Carl Weathers (General McKraken), and Johanna Watts (LT Bradley) are solid in their portrayal of their respective characters. Quite frankly, I am a white male, and I like a diverse multi-ethnic cast in films. Nice to see the two underutilized veteran actors kick ass even if they are older now.

The basic premise is the same as the big budget version of the film, Aliens and the navy fighting them, the filming took place in Wilmington NC, and the shooting schedule was limited, but for what they came up with the end result is highly watchable.

Here are two screen caps to wet your whistle until the flick airs: 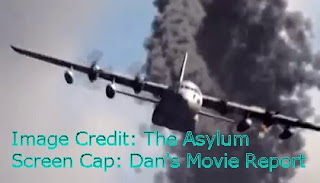 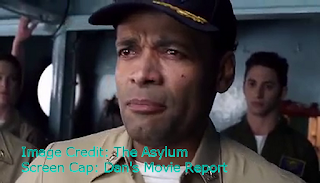 Overall I give American Warships a 7 out of 10 very solid effort and worth a watch, yeah there are some minor problems with some of the backgrounds and such, but, watch it! Also watch the big budget version, which had about 1,000 times the budget! Both of the films can and should co-exist, American Battleships serves to show that independent film producers can put out a highly watchable product.

The film is available for pre-order as well on Amazon @