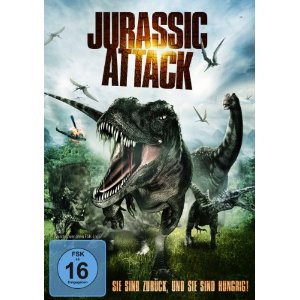 Dammit I love B movie madness! Jurassic Attack opens with a light plane carrying professor Roxton (Michael Worth) experiencing engine trouble, and eventually crash landing in a dense tropical forest. Wouldn't you know it, there was a large dinosaur there to be the welcoming party! The professor survives, because his com-padre remained in the crashed plane and became lunch.

The main story involves some sort of militant in the jungle angle with a biological weapon. A small group of military personal are sent in to rescue this ultra hot looking scientist, kind of in the vein of Tears of The Sun.

Leading the rebels that want to procure a biological weapon, is a man named Marquez (Israel Sáez de Miguel), he has captured scientist Angeles Ibanes (Natascha Berg) to do his dirty-work.

Jurassic Attack is cheesy, silly, at times the epitome of camp. None of the militants have much aim, and the dino creatures don't run from a hail of bullets. The dinosaurs are a times poorly rendered, but no worse than most other movies from companies like The Asylum. The main problem I had was that the dialogue is woefully bad, and not in a cool Evil Dead way. This element detracts from the flow of the story. The constant references to The lost world and criminally bad punning, were hard to take for 90 minutes. 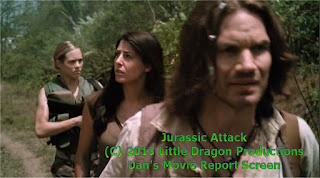 Above Pic: Looking for Dinosaurs and avoiding militants, the crazy professor has sexy accompaniment, with a couple of sultry, well armed ladies! (C) 2013 Little Dragon Productions.

Not all is lost on Jurassic Attack, however,  as Michael Worth's Roxton character adds a lively spark. Michael Worth states on his Facebook page the initial role was written for a 70 year old British guy and he added his own spin, to entertaining results. Sexy actresses Alicia Ziegler as the forceful military gal Sarah Haldeman, and Natascha Berg (see above pic) add a strong female presence to the big gun, big dinosaur, Jurassic Attack.

Overall, Jurassic Attack is pretty bad, but has a few bright spots. Worth a rent ONLY if you like B movies, dinosaurs, and ludicrous dialogue. I rate the film a 4 out of 10, you have been warned!