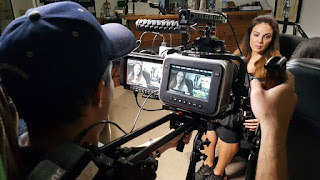 Above Photo: 'This is Meg' behind the scenes from Facebook page


Greetings valued Dan's Movie Report readers. Director Alex Ferrari has informed me that the initial principal photography on his new comedy film 'This is Meg' has completed. The film, which a successful Seed and Spark campaign raised 15,000 for the production went right into filming as soon as the finances were released. Let that be a lesson to future film makers, have the idea, story, and materials ready. The people who support you are expecting the product to be shot and released in a timely matter! Alex is a well seasoned film vet and has a cool site called Indie Film Hustle.


Watch for more exclusives on 'This is Meg' coming later in 2016 on Dan's Movie Report!


Check out 'This is Meg' on FB @  https://www.facebook.com/thisismegfilm/?fref=ts

Check out the official sites: