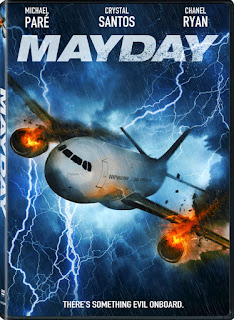 Greetings valued Dan's Movie Report readers, as we near the Halloween season I have decided to select a few titles horror related. Although many of my reviews have focused on action, this site is open to reviewing all types of films, drama, comedy, foreign, and horror. Brushing this aside for the moment, today I tackle a film that Crystal Santos told me about awhile back. She told me she was going to be in this new film called Mayday and all she let me know about is that it will be a horror film called Mayday. Crystal, who is known for her work in stunts, said that she would also serve as the stunt coordinator on the film. To avoid confusion when searching for this film make sure you add (2019) as other films called Mayday have been released prior.

These facts aside, I made a few attempts to connect to the film maker, and was told that the film would release on Lionsgate in 2019. Now on DVD, and available from the various outlets comes this 76 minute, yes you heard right, very short, yet rather unusual horror flick. The entirety of Mayday takes place on a flight to London, in what seems like a smaller plane, not a 747 or 757. the film opens with the passengers getting on the plane and let us just say each one has a quirk or characteristic that makes them a bit annoying, haha, but actually it kind of works later in the film. We have newlyweds, a man clutching a briefcase a Sikh doctor, two very flighty flight attendants a gruff old man, and the actor Michael Paré, who plays a sky Marshall, and Crystal Santos, the seemingly only sane one of the bunch. Of course we have the young pilot and copilot as well. The film is classified as a combination drama, action and horror, while this is true, there is not much action.

The movie does develop some of the characters, but we never really know them, just what they are like. More of a personality study in reactions, rather than out and out jump horror, Mayday works in the realm of supernatural, yet once (Minor Spoiler) passengers start vanishing things get rather frantic. The pace still seemed a bit slow for people in peril, even though no one had a clue where the danger came from. 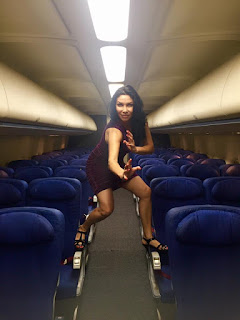 Above: Behind the scenes photo of Crystal Santos on the set of Mayday Photo by Ryan Walker - © MWP Productions

I will not spoil the story, as the ending is pretty cool, and elevates Mayday to a pretty decent film. This fact aside, I did not care for much of the acting except for Crystal Santos and Michael Paré. Not that the acting was bad, it just seemed to forced and not natural. An example when the newlywed watches her husband vanish she is of course visibly upset, then is calmed down, then kind of falls a sleep, I am thinking if I lose someone, I would be upset, nervous, and angry for the entire flight, no rational person unless given a sleeping pill which we did not see, would just drift off to dreamland while their loved one just is voided from the seat next to you.

Actually director Massimillano Cerchi has a difficult task at hand, because the film is set in one place, the characters barely move thus they are relegated to their airline seats or going to the bathroom, as the plan is in flight for the majority of the Mayday. The script and dialogue are interesting, yet at only 76 minutes, I felt a bit jilted that I was dropped into a film that had already started. Actually, to see the people in the gate waiting for the plane, or even prior to flying would have made me care about the characters more. Understandably though, Mayday is meant to be a sonic blast of horror, mixing elements of the Exorcist and Twilight Zone. Playing out more like an episodic TV show rather than a movie, Mayday could have easily been a plot on The Twilight Zone show, and even worked in a 60 minute time slot.

Kudos to the lighting and DP personnel, too often in Horror films it is so hard to see the action when whatever it is jumps out at you. Mayday you saw from beginning to end the plight of the virtually helpless passengers. I know it seems trivial to point this fact out, but go back in your recent horror film memory and count the number of times you said wow, I can see the things happening.

Overall, I struggled with the rating, a second pass yields slightly better results. Mayday rates a definite rent on Amazon, if you like horror a 14 dollar DVD is not out of line, basically the film is about a 6.5 out of 10, I wanted more, yet Mayday (2019) was not disappointing. Check out the band Leaving Eden, who provides the closing song, appropriately titled Skies of Grey. I have had the opportunity to witness them live a few times and they are quite talented!