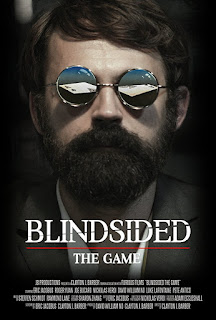 Actor/Writer Eric Jacobus as Walter Cooke and director/Producer Clayton J. Barber have crafted an amazing new action film for 2018. Eric has been known for doing many action shorts and even an amazing feature Death Grip, but I must say this one is just incredibly well produced, slick and polished for an indie flick. Walter Cooke is a blind man who has incredible sense development and as we soon see some epic fighting skills.

A shop owner is into debt with a loan shark, and soon mayhem erupts, I mean you name it, ha! Having just obtained a Shih-Tzu myself my particular favorite scene is a gentleman who is a thug, a stylish challenged thug, with a pineapple or some sort of Hawaiian shirt open is holding a gun in one hand and his Shih-Tzu in the other hand, so I am not sure, I mean what is happening! Of course this is a dark comedy, yet I will say this, never point a loaded Shih-Tzu at, a blind man, or any one! Watch for David William No as well, he gets in some cool action! 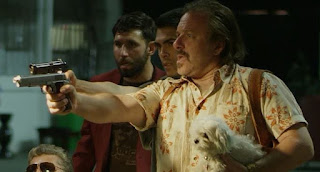 Above: One loaded gun, and one loaded Shih-Tzu. Blindsided: The Game

A multitude of fighting, cool moves and many cans of whoop ass are emptied. Nice to see actress Michelle C. Lee as a cool bartender, get ready, she is back. will she join the fight also, if she does many thugs will die? Look for the cool as a cucumber and deadly Luke LaFontaine, who serves as the film's sword fight coordinator, and action legend Roger Yuan as the shop keeper Gordon. This is a great film. professionally acted, and check out actress/stylist Karen Pang, as she jogs by and does the hair and make-up well not at the same time. HAHA! I love this- as in indie flix everyone does multiple things.

Finally, it is important to note the tight editing and transcending musical score that makes this a winner when it comes to DVD. I am sure there will be many out takes and fun stuff. I rate 'Blindsided: The Game' a solid 9 out of 10, yeah it is damn amazing, film surprised me! A must own!

More information to follow closer to the official release! Film Will release free to YouTube May 17th! Watch entire film! https://www.youtube.com/watch?v=N8sxm30HymU&t=537s
Posted by Dan's Movie Report-Danny Templegod at 1:01:00 AM