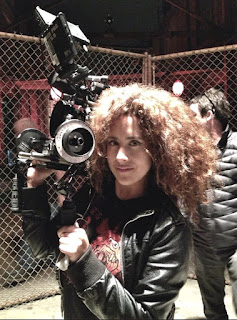 Greetings valued Dan's Movie Report readers. As you have come to expect, creating the news rather than sharing it, I can officially report that star DP (Director of Photography) Carmen Cabana has joined 'Hollow Point' The action film directed by Daniel Zirilli! Chad Law, Evan Law, and Daniel Zirilli penned the script. Of course, more big cast announcements will be arriving on the major sites, however, I thought it would be pretty cool for my audience to become familiar with Carmen's work, specifically on Season 2 of Narcos and as DP on Assassin X, the award winning film from Art Camacho!!

I had the distinct opportunity to interview Carmen Cabana for Assassin X AKA The Chemist--- http://dansmoviereport.blogspot.com/2015/10/producer-carmen-cabana-interview-part-1.html

In addition, Carmen was my guest at the 3rd Annual Widescreen Film & Video Music Festival. Carmen made the trip to attend the awards show on The South Beach Lady Yacht February 19th2017.

Carmen is a total pro in the business and is adept at all styles of filming from film to digital in all situations worldwide. Take stock and push your shutters over to her official website for all the information on Carmen, watch for a new interview with her following principle photography of Hollow Point.

Director Daniel Zirilli is in the process of assembling a dynamic cast and all will be revealed soon as filming is set to begin around June 25th in Los Angeles. Keep it locked in for more Hollow Point information including contests, photos and more, on your home for global action, Dan's Movie Report!
Posted by Dan's Movie Report-Danny Templegod at 4:22:00 PM