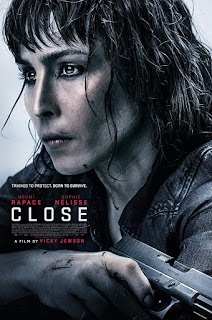 Greetings valued Dan's Movie Report readers. Today is the day! Netflix hits hard with two kick ass properties, The Punisher season 2 and Close starring Noomi Rapace. Not gonna lie anything Noomi stars in piques my interest. I find her to be engaging in talent and personality. Probably my favorite movie of Noomi is the crushing Daisy Diamond. That said, of course Noomi is best known for The girl with the Dragon Tattoo series and Prometheus.

Close opens with an operation somewhere in the middle east where Noomi is assigned to protect an individual but the operation turns sideways and the truck driver is killed. Since this was before the main credits roll I figured this would not spoil any main plot points, which I freaking hate when reviewers do.

OK Here we go! Close represents a huge step for Noomi as a action heroine, She is kicking some serious ass! She has really leveled up the intensity in this vicious violent film. The five foot three 115 pound girl is throwing some power and really hurting people, well in this film. I mean ha, this is a fantasy right! Seriously though Close is a real edge of your seat action yarn, that never slows down, except when you think nothing is happening, except it does! Noomi flexes her acting muscles in scenes with the young lady Zoe, she is protecting. Noomi has to remain emotionless during the film, but she proves she can handle the delicate balance of character.

Close probably should have had a theatrical run prior to Netflix. Interestingly Noomi is listed as one of the film's several Executive Producers. I am guessing that Noomi eventually wants to be back in the big budget action game but her own action series or film.

The film seems like it was shot or edited with a brown filter, A sepia tone to convey the desert setting. That said, the cinematography is quite engaging, as the audience is brought into the action. Close as the name implies is filmed almost as a character study on the trials of a personal protection operative.

Great action, some creative death scenes are only part of Close, as the film takes some interesting twists and turns over the short 97 minute run time. The cool thing is there are many breaks in the action to learn about the two central characters on the fly, with the step mother looming in the background trying to take over control of her late husband's money. The story in Close is pretty simple, but it develops enough of a human interaction to keep the viewer interested without getting bogged down in too many meaningless distractions.

Kudos go to Netflix as in 2019 they are increasing their original content output. Close represents a fresh start to the year. Close rates a strong 8 out of 10. If Noomi wants to be my personal bodyguard, I would not mind ha! Serious though, the film is great and I hope it comes eventually to DVD with special features.

Go and get Netflix now! Or point your browsers and log in to www.netflix.com
Posted by Dan's Movie Report-Danny Templegod at 10:48:00 AM