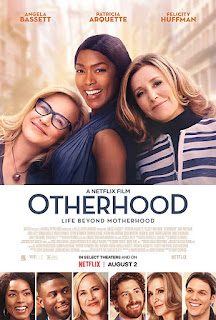 Above: Otherhood Official Poster from IMDB

Greetings valued Dan's Movie Report readers. I make no secret that my favorite actress is Angela Bassett. I have watched the majority of her films. Recently she unleashed a very creative slice of sardonic comedy, aimed squarely at the Sex in the City crowd. I hear the murmurs in my readers why the flying hell would I review a chick flick? Ha, well I mean it is R rated and rather raunchy and stars three excellent lead actresses.

The story begins on a Mother's Day in which the three friends decide it is best to just go up an surprise their kids in NYC by driving in from upstate NY, without telling them. It starts out like a road journey but, they did not really start by showing their adventure getting there. Angela Bassett's son is probably the most interesting as he writes for a magazine called “All Balls”. Ha, he has a good job and is rather successful. One son is basically an unsold author. Some hilarity ensues and no topics are taboo even as one of them catch her son having sex.

The moms are pushy, kind of turning the tables on their kids, like they were to them when they were young. Actually I was pleasantly surprised watching this. Felicity Huffman scandals aside, is pretty damn funny the release was delayed amid the college admissions scandal, and like a true adult she admitted wrongdoing. Patricia Arquette is a pro actress, and played her tole a bit more subdued and sophisticated, then suddenly a quip is uttered and it is very funny. Angela Bassett really let her hair down and danced the night away, and hangover included hah, knowing that Ms Bassett is the exact opposite to her character makes it funnier!

I recognize comedy, but for the average guy, I will say it will take a bit of intellect and 'All Balls” to watch, Modern Family executive producer Cindy Chupack, really brings her A game and crafts a great screenplay for Otherhood. I like the fact she takes the time to tell a backstory on all the central characters and their children.

My favorite of the kids was Angela Bassett's son Matt Walker played by actor Sinqua Walls. His acting is literally all balls just like the magazine. To be able to share many scenes with a legendary and academy award nominated actress obviously shows. I mean who wouldn't be surprised if Angela Bassett shows up at your apartment, unannounced while a rather young lady is there? I respect a man who writes poetry as well, I dabbled in that in my 2os.

It is nice to see leading ladies Huffman and Bassett involved in production as Executive Producers. I agree, the old adage is you want something done right, do it yourself and create.. Otherhood gets very serious at the end, as issues of moms feeling like their sons do not even need them. Many serious issues arise., including Angela Basset telling her son to move on from her. Otherhood is quick, biting and real. The audience is of course limited to women for the most part, Don't listen to the low rating, Otherhood is a solid 7 out of 10, a must Netflix watch. Www.netflix.com

For detailed cast and crew info: