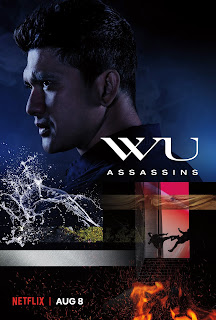 Greetings valued Dan's Movie Report and Action-Flix.com readers, FINALLY Netflix has an A one king sized action property! Wu Hoo, or shall I say WU ASSASSINS! Today was the binge and purge! Although a Dr. appointment derailed a full 10 episode purge, I mean who puts out a show Thursday? Oh Netflix! You forced me to binge in the Dr waiting room, I mean nothing like fights and F bombs in a quiet setting!

This will be a no spoiler review, a big FU to those who spoil the fun! Essentially I do a likes and dislikes, point out some elements, you all know about the series, just watch it and decide for yourself.

The ten episode series at 45 minutes and episode is a perfect length to get the ball rolling. With a variety of directors, using their own take on the script, I was ready to be more critical of one than the other, and now I know why they are used. Of particular note is the way each fight sequence is filmed. Director Roel Reine opts for a clear close quarters sequence is episode three involving JuJu Chan's character Zan. In other episodes, there are more shadow fights, dimly lit on purpose as doubles had to be used, not a bad thing of course, and necessary. 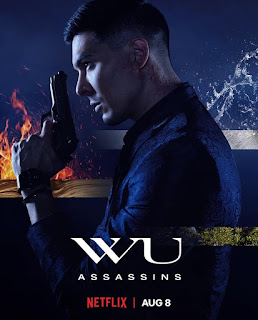 Watch for the fight action, so many things to love about it. Iko and his team, and the various stunt people used, craft a great action piece. Naming names Dan Rizzuto is a blade master, the knife sequences and weapons were killer! The very versatile Megan Hui taught and basically worked with Celia Au and Li Jun Li to craft some excellent action. Megan worked on the choreo with JuJu then they had some fun sparring and learning from each other. Kimani Ray smith brought supreme safety and creativity to the action, boom. Stunt pro Steven Chang and Marc Dacascos kicked some ass, all I have to say is #Standupforstunts! The stunt coordinators can win an Emmy not an academy award, come on now and Kimani needs an Emmy nomination for this one for this show!

John Wirth, the man behind Terminator Sarah Conner Ironical and many other cool shows brings in all the the elements of his past, and pays homage to the elements like in the movie 5th Element.
There are supernatural aspects of the show that cannot be spoiled but let us just say things are not what they seem. Shape shifting,, fights, gun play, this hard driving show will blast your senses. 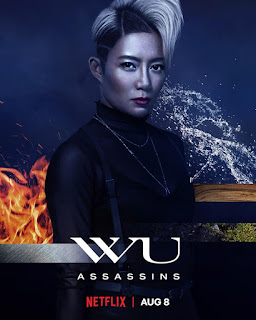 I make no secret in general as to my rather distaste for wrap music, but alas it totally works here, case in point every single lyric tells part of the story if you listen to it, plus it is aggressive and angry. Of course I am a huge Snoop Dog fan so of course, he has a style and flow. The music by Jeehun Wang sets a high tech wave when need be, suspenseful when need be, soft when need be, it all works, It is very hard to lay a musical bed for an entire series all at once, basically Wu Assassins could have been a theatrical trilogy dropping all at once.

Pointing out specifics is hard without spoiling anything, there is a diner fight that is quite entertaining. I really liked Tzi Ma's character he basically plays a grocer who knows all and sees all, but interjects his own unique humor, A bit of levity in this ultra violent entity. Celia Au kills as the Obi wan, yep, she is a teacher, and she speaks in prophecies and in riddles, I am assuming, or I hope she will be back in the next season!

Of course Iko and Katheryn Winnick are absolutely amazing, the two have to go through a complete transformation and a myriad of emotions in this series. Lewis Tan is amazing as well, I mean action notwithstanding there is emotion throughout. The directors gave proper direction and the pro actors followed it, and I am sure gave their own ideas, Kudos to Iko and Katheryn for putting their own stamp on this investment!

Of course there is massive two part season ender, what happens, well it plays out nicely. Will there be a season 2? Hmm I think so, if not, I am sure the creators will make a limited movie for Netflix, I think that is a logical move to pic one of the directors Roel, can use the IMAX camera and boom, you have a theater film for WU!

The minor downsides are only two, Wow were the CGI and rendering effects very sub par, my issue here is they had so much time to properly render the supernatural elements why could not they take the time or hire the people to get them to be epic, not B movie level. Two, I realize Summer Glau was kind of a last minute add on but hot damn, why not use her more, or is that planned for the second season! That is all I got to say I did not like. 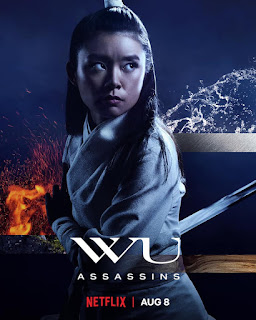 To end this dissertation on a positive note, I will point out this is perhaps one of the best ADR on a Netflix series, I hear each character loud and clear, regardless of setting, and scenery. ADR and mixing is a damn hard job. I was a radio DJ back in my College days and as students we were taught to talk loud and clear on the air, and when merging tracks I had to splice tape ha! Today it is all digital, but the trick is everyone has access to the same software, so real skill is needed to get a show that has many different inside and out settings sounding nearly flawless, yes it is that good! Even the internet trolls will cower in fear at the screams and vocal epicness of Wu!

I am detracting a rating point for the dodgy CGI, but Wu Assassins rates a rather epic 9 out of 10 on the fun scale, The 7 hour series time wise needs to absolutely be binged and binged again, If you do not binge this dearies Zan will find you and take out her metal blade steel heel and kill yeah, (it is in the trailer no spoilers) If all goes well throughout 2019 we will be doing various articles and interviews on Wu Assassins!

If you do not own Netflix, spend the 10 dollars, drop cable if it is too expensive, get Hutu as well and go hard you have The Irishman coming out, and many other epic stuff on the horizon. Www.netflix.com

For my older Interview with Actress JuJu Chan please check out http://dansmoviereport.blogspot.com/2014/08/actress-juju-chan-interview-exclusive-c.html

As a final statement with regards to Wu Assassins and the ever changing landscape of TV:


Netflix aims to replace the Iron Fist series and create their own legend, remember all of the Marvel series will be off the network by 2021, the last being Jessica Jones. It will be interesting to see how they are going to position the series, aimed more for teens or adults. With several established action stars like Iko, Mark Dacascos, Katheryn Winnick, Lewis Tan and Summer Glau, the show aims squarely at not only the action crown but the comic book fans as some of the characters have some sort of powers beyond human.

Various directors are taking over duties sharing episodes. Of particular note is Roel Reine, Roel directed Scott Adkins in Hard Target 2, He directed the IMAX episodes of Marvel's Inhumans, and an epic film Redbad and has a brand new film airing on Discovery channel for Shark Week, called Capsized: Blood In The Water. Check out this kick ass photo below of Roel, from IMDB working on Wu Assassins! He will be directing Episodes 3 and 4! I love the idea of various directors sharing roles!

Netflix has an official media page for Wu Assassins @ https://media.netflix.com/en/only-on-netflix/472574

In Addition, although the video is bit old, it is important to look at the CSA and IKO team stunts that worked on the project. The first video was a periscope video detailing the initial phase of working out the fight sequences. https://www.youtube.com/watch?v=h-E1-3ojr2I


For Netflix and action fans, it is VERY important that this series is successful, especially the sheer number of action shows like Sensi8 and others that have either become too expensive to produce or Netflix has lost the rights to.

The absorbing of FOX by Disney leaves a huge question mark with regards to R rated and TV MA franchises. I am assuming since essentially Disney is purchasing Hulu, or a majority stake, they will retain the R rated Marvel series properties as part of their extended library. A very interesting note is that Although Terminator: Dark Fate is R rated, Disney will do a huge number of the global release platforms, check this link out! https://www.imdb.com/title/tt6450804/companycredits?ref_=ttfc_ql_4 meaning, yep, the house of mouse, is evolving! Hopefully by 2022 we will see our R rated Blade film!