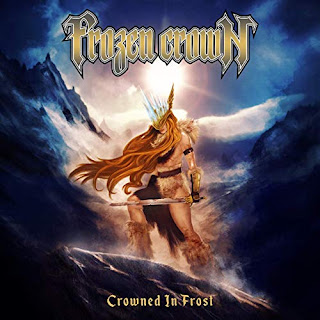 Greetings valued Dan's Movie Report readers, today I mix it up a bit and review an amazing new CD from the band Frozen Crown. Hailing from Italy, this band caught my attention with several amazing music videos, most notably, I am the Tyrant and Neverending. I kept watching YouTube for more, just an incredibly talented and diverse band. Doing independent metal is often a thankless and hard job, Frozen Crown takes so much pride in crafting intelligent songs, and coupled with a energetic live show, warrants a review of their latest CD Crowned In Frost. Please note, I did not receive the CDs yes there are two of them (The Fallen King is their first) for free, I bought them, one from Amazon and the other CD and limited LP direct from the band. Support indie music is my motto!

From 1984 thru 1995 I reviewed music for various magazines, some music was amazing, some was average and some was awful. I always seem to gravitate towards 80s music and some modern, yet the last big discovery I had in music was Nightwish in 1995, of course Arch Enemy with Angela as well, on top of the usual Iron Maiden, Dio etc... I must say Frozen Crown from the first note I heard blew me away like a lightning bolt burned from mount Vesuvius, the band merges a variety of styles in a seamless quintet of cacophony of sonic blasts.

Crowned in Frost opens with a short intro Arctic Gales, then blasts into Neverending. Neverending is a fitting opening song with a power set of riffing, followed by the sonic vocals of Jade Etro. Frederico Mondelli writes the music, playing guitars, and keyboards. Jade and him craft the lyrics as well. The vocals on the CD are a unique blend of mellow and power with Frederico blasting out the occasional death metal power. Kind of reminds me of Arch Enemy meets Nightwish! The galloping speed of the riffing reminds me a bit of Iron Maiden, but faster.

Of particular note is the band's young prodigy guitarist Thalia Bellazecca. Amazing talent, for her age. According to Frederico she is brought in as the live guitarist, yet, I hope she can find her way onto the next studio albums. The entire band is so talented, and singling her out is not fair to the bone crunching back beat of Filippo Zavattari (bass) and Alberto Mezzanotte (Drums) both who provide a solid backing bed to the absolutely energetic and often complicated dual lead guitar riffs.

Diving deep into the CD Crowned in Frost, the music is made for driving, and waking up, rising for a glorious battle ahead regardless if it is a battle in an office or charging a Roman Army! All of the songs flow together to tell a bit of a story, but never will the audience be bogged down in a mire of slush, this CD is all action no filler tracks to round out the disc.

Before you know it, the album bleeds into the final track, which is the title track, Crowned in Frost. I must say it is epic, begging for a live performance and audience participation, Jade calls out the lyrics like a siren then Frederico blasts out some Angela style Arch Enemy growls, the music is heavy, yet listenable, then it flows into a more mellow lyrical interlude. The song gallops along at a good pace until conclusion. A fitting ending to a damn fine CD.

What more can I say, Crowned in Frost is just an amazing CD, an Earth shattering sophomore CD and a great followup to The Fallen King. Both CDs are great. This band needs to be huge, and play in the USA. The live performances on YouTube are quite amazing and the various shows and festivals they have done this year, have allowed the band to have hoards of new fans worldwide!

I rate Crowned in Frost a 10 out of 10, The is a generational unique sound, worthy of multiple repeat listenings, and an excellent bridge between metal styles. I will say buy directly from the band, as they do all of the mailing direct, that said, the music is also available on Amazon. The link to their merch is:

Thalia Bellazecca has an official Facebook Page as well: https://www.facebook.com/thaliabellazecca/
She really rocks and on her YouTube page she has a play through video of one of the songs and a couple of cool cover tunes. A rising talent.

Check this out! Queen Of Blades play through by Thalia!

For the YouTube make sure you check out some of the amazing videos: https://www.youtube.com/watch?v=9o0imRANjm0 Neverending

Stay metal, and keep your eyes and ears to the indie scene! Keep it locked on Dan's Movie Report, as I plan to review more metal by the end of the year!
Posted by Dan's Movie Report-Danny Templegod at 6:09:00 PM