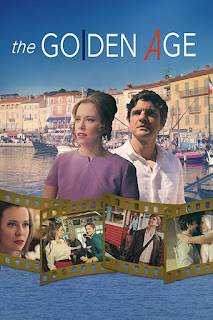 Above Image: Poster for 'The Golden Age' © 2019 Belle Époque Films

Greetings valued Dan's Movie Report readers. Across my desk today comes a brand new film, a swerve to the left away from the action and into a French period drama. Producer/Director/writer and star Jenna Suru crafts a detailed and lush tale of two struggling artists who have a chance meeting. Jenna's character Angèle Devaux is a stage artist who dreams of big time movies. Sebastien Cipolla portrays Sebastian Davis a film-maker desperate to find his inspiration and art, all the while figuring out a way to pay his bills.

'The Golden Age' has the accouterments of a film festival type movie, but is never pompous or pretentious. At it's heart it is a boy meets girl story, set against a lush and entertaining french environment. The scenery acts like a character in the film, with each location displaying the beauty and tapestry of a time long past.

Being that 'The Golden Age' is set in the 60s, specifically 1967, there are several musical and allegorical references to the Beatles, Bridget Bardot, the first woman running in the Boston Marathon, Vietnam War, and other things going on during that time frame. Jenna makes sure to invite the audience to look at the background in her film, as there are various people who movie in and around the main scene. In fact when they first meet, a couple of ladies are having their picture taken in front of the Eiffel Tower and she has to move on the bench closer to him, hence a chance meeting right from the outset.

Her parents have a country house and once the get there, the couple seem to learn more about each other. This is when their creative adventure starts to manifest a plan for a new project. A Golden Age is movie where the path to create is more than the destination.

'A Golden Age' is a loquacious drama, yet each character seems to provide his or her own advice. The script is detailed and well written. The two leads are likable, Jenna seems to be a bit cautious, yet thoughtful and caring, What I like is she is not overtly bubbly, just natural and honest. She has a frustrated demeanor when speaking about her career stating: “ My life is like a mix of miracles and disillusions”. She seems sad about her status in life, yet somewhat hopeful. He states that she is different from other actresses as she is actually concerned more about her film roles, not just her looks and fame.

The conversation shifts to personal life all the while ebbing and flowing, never too positive or negative. The pair discuss family and how war has affected his family, how his father has basically been absent in his due to wars. There is an ongoing plot point of him being deep in debt. Without spoiling it, The Golden Age is a thought provoking drama, tackling the age old question of creativity verses a quick moneymaking opportunity.

Perhaps the running time of 107 minutes is a tad too long, slightly slow moving, but other than that, I have now qualms about any of the acting, story, settings, lighting, or cinematography. Just remember the Golden Age is a art film tackling ideas more than plot developments, allowing the viewer to think for themselves what the goal of the cast is, and what they would do given their situation. There are some plot developments that kind of force him back to her. Ultimately, it is an uplifting story for an artist, 'The Golden Age' should spark creativity for those who are struggling artists.

Overall, I enjoyed 'The Golden Age', a perspicacious drama, two artists meeting,  trying to stay focused on their dreams and goals, to “Change the World”. I struggled a bit regarding the rating, yet 7 out of 10, seems appropriate. Jenna had to work hard wearing many hats on this production, I enthusiastically look forward to her future projects.

Jenna has this to say about The Golden Age (L’Âge d’Or): 'L’Âge d’Or' is my tribute to 60s Saint-Tropez, film sold-out the Opening Night of London IFF last March, we’re very thankful for the great reviews and awards. “L’Âge d’Or” is the last drama ever filmed at Notre-Dame Cathedral before the fires and is a tribute to the artistic journey, to the artists from over the world who flew to Saint-Tropez in the 60s to change that world that didn’t work for them. “

Connect with Jenna on Social Media: