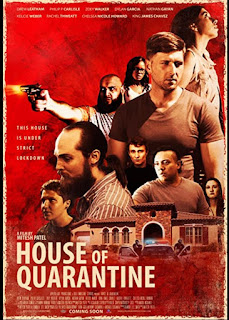 Above Image: (C) 2021 Gavitas Ventures, all rights reserved, used for promotional use only, image not monetized.
From Gavitas Ventures, HOUSE OF QUARANTINE launches its poster ahead of its theatrical release and VOD rollout on all major platforms on July 20th.
Director Mitesh Patel (Anti-Coronavirus, Instant Karma) brings together a diverse cast for a tense, edge-of-your-seat thriller shot during the COVID lockdowns of 2020.
SYNOPSIS:
Nine people have been locked down together in a house while trying to shoot a movie. Unknowingly, one of their group is infected with COVID-19. The next three weeks become a life and death struggle for survival with no help from the outside amidst a global pandemic and national chaos.

Greetings valued Dan's Movie Report readers. Across my desk today comes a film made during quarantine, about a quarantine of a more extreme variety. 'House of Quarantine' has a group in a home, who happen to be making a movie, so in essence we are watching a movie, about making a movie. Being brutally honest the first 20 or so minutes of the film I really did not care for, but the final hour is really amazing as things take a decidedly dark turn, no spoilers!

There is a film director, a sound guy, a PA, and of course the stars all together in the producer's house. When it appears that no one is allowed to even leave their own home, actually this did happen in China and parts of Italy, they become increasingly agitated and scared, lashing out at one another.

I really cannot describe the movie without spoiling the plot. I could classify this film as a thriller, as there are no exterior forces, no monsters, and no supernatural elements. The acting is average, but not too bad for this level of film, some seems a bit wooden, but again the story is solid in the second half.

Director Mitesh Kumar Patel seems to focus on what he wants out of his actors. Because they are supposedly stuck inside the same house for over two weeks, they do not have a change of clothes except for the lead actors. I think although this understandable they are in a home so I would have to figure the owner of the home would at least have t shirts and shorts etc... Let us just say other things in the home were taken or removed, but not clothing!

There is some action and violence near the middle and the end, some things are predictable, some are not, again solid story, but nothing Earth-shattering. The lighting, music and sound are decent, slightly above the B movie level. Rachel Grace as Macy and Zoey Walker as Brenna seemed to rise above the rest of the cast Zoey in particular had some great sarcastic lines, plus she has potential as a strong actress in the future. The rest of the cast were solid enough to not waiver or slow down the story.

Overall, I just thought the first 20 minutes were tedious, even though this was setting up the story, the house was not super nice but say upper middle class, color grading was a bit drab. With all of those detraction's yet 'House of Quarantine' is worthy of a rent, and rates a 6 out of 10!