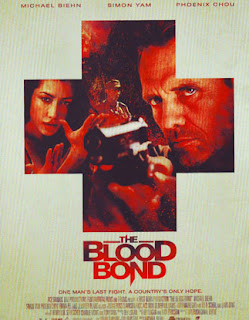 I watched The Blood Bond awhile back and meant to review it. Michael Biehn as John Tremayne and the lovely Phoenix Chou as Deva are excellent in the film that follows the plight of a leader of a peaceful country who after his assassination attempt needs a special blood type and the only matching donors are killed leaving only a reluctant John Tremayne left to provide his blood.

The Blood Bond is full of action, copious amounts of fighting, and some clever dialogue like: "The brighter the sun, the darker the shadows." Phoenix is very easy to look at and fluid in her fighting skill onscreen. Here acting skills are not bad, although a bit one dimensional. She dispatches the thugs with ease, and her speed is impressive.

The rest of the acting with the exception of Simon Yam as commander Chow is pedestrian at best, and downright horrid at worst. The film as a whole is not too bad because the story moves along at a decent clip and never seems to bog down.

I rate this film a 6 out of 10. Look for Phoenix in other films, she has a lot of potential. For further information point your browsers to http://www.ram-ent.com.my/movieTheBloodBond.html
Posted by Dan's Movie Report-Danny Templegod at 11:09:00 AM