Site News and Snowhite and the Huntsman news...

On the right hand portion of the page I added a new feature, a weekly top five. The top five is from the week prior to the day the site is visited. Because of this dynamic fact, the list will possibly change daily! Keep clicking to put your favorite up there!

Many online sites have reported that filming had to be halted on Snow White and The Huntsman (affectionately known as SWATH) due to an injury suffered on the set by lead actress Kristen Stewart. No official word has been given with regards to her health or when the production will resume. Actress Cecily Fay from Dragon Crusaders is working on the secretive production doing stunts, She did comment on her twitter that on October 9th they were filming in the rain on a mountain and she was enjoying it. When Cecily is allowed to speak about it, I will ask her about the production.

My thoughts are with Kristen and the entire team of SWATH! 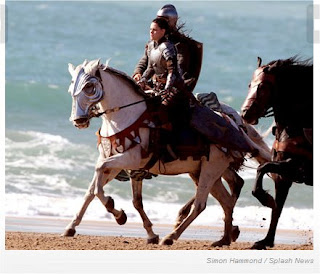 Above pic is from Simon Hammond Splash News
Posted by Dan's Movie Report-Danny Templegod at 12:42:00 PM