Curse Of The Phantom Shadow

Funding an independent film can be a risky venture for all parties involved. I present some initial news of a project called Curse of the Phantom Shadow. Mark Ross has assembled an enthusiastic team to present a film that pays homage to the old school spy thrillers like Dick Tracy.

They are trying to reach a goal of 5,000 dollars to make the film and are currently at 1/5th of the goal. As I writer I must point out to research all projects carefully before making an investment. The project appears to have a decent head start in that props have been built and sample set images were sent to me. 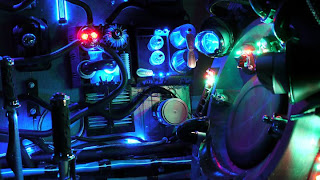 I will review the finished project when and if it is completed, and wish Mark and his crew success on it.
Posted by Dan's Movie Report-Danny Templegod at 9:14:00 AM