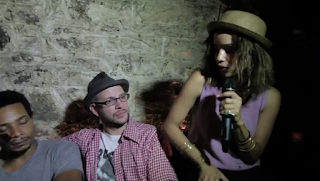 
I have been reading various reports about George Miller's Mad Max: Fury Road from sites like E! online and Indie Wire reports that Fury Road will begin production in March of 2012! Actress Zoë Kravitz has contacted me and told me of her official involvement in the production. As soon as I get official update from her including a shooting schedule and character she will play I will post it on Dan's Movie Report. Look for set reports and other information on Dan's Movie Report. The film will also star Tom Hardy as Mad Max and Charlize Theron.

Zoë's band Elevator Flight is still performing at various venues and have posted a very cool new video on youtube slide your browsers over to
http://www.youtube.com/watch?v=eO3kuxOHD0Q
Posted by Dan's Movie Report-Danny Templegod at 10:43:00 AM