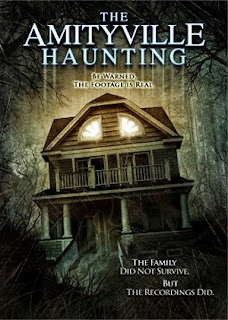 The Amityville Haunting opens with other people who have died over the years in the Amityville House. The new family movies in because they were having money trouble and the father forced the family against their will to move in.

The entire film was about the child of the family making a documentary of the whole ordeal. The Amityville Haunting falls flat on it's face, as the plot was boring. The rehashing of the older films in a paranormal activity style production just was uninspired. There are other victims outside of the family, but we don't care as they are never introduced as true characters.

The Amityville Haunting moves at a snail's pace jamming nearly all of the actual plot developments in the end, this might have worked in a short film like 20 minutes, but to stretch this to 90 minutes is quite agonizing. The repetitive telling the boy to shut the camera off 20,000 times, was very annoying.

Overall, I have to give The Amityville Haunting film a 2 out of 10, a pass.
Posted by Dan's Movie Report-Danny Templegod at 11:18:00 PM