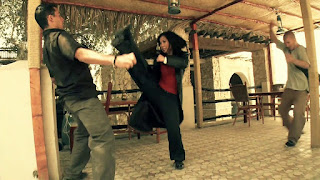 As a writer, I am constantly on the lookout for new films to review. One area of movie making that is under promoted on the web is the short film industry. Yeah there are film festivals, but you rarely ever see the films reviewed. OK enough of my soapbox, lets get this fantastic short film called Dohard which was shot in Qatar.

Dohard is an extremely high quality merging of Parkour (free running) action style mixed with full on martial arts madness, and a dash of gravity stunt work. The talented folks at Stunt Power Films have produced a short film masterpiece which hopefuly will allow them to produce future feature length films. 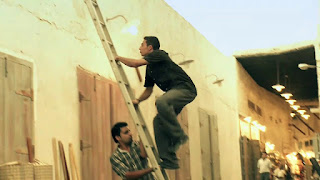 The film opens in an outside cafe where customer Selina Lo who plays The Customer is waiting for her check when suddenly The Thief (Terry Kvasnik) comes along and steals her wallet off the table. Not to stand and take it The Waiter played by Dean Alexandrou gives chase.

What follows is a full on assault on the senses, with more action that I have ever seen in any short film. The chase goes through the city, along the shoreline. All of the actors are adept at running and parkour. Selina lo just unleashes a world of speed, grace, and energy with her martial arts skill, even choreographing her fight scenes! After watching this it is easy to see why Selina deserves movies like the Scorpion King 3 to hone her talents. She is a multi-talented action star, with an expressive face. 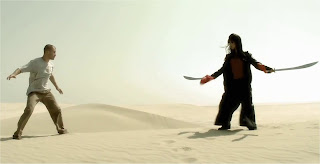 The camera work on Dohard is impressive considering the rapid movements throughout the film. Directors Dean Alexandrou and Masato Riesser know how to frame a sequence, with diverse angles, blending in a synergistic smooth fashion.

Even though there is no dialogue in the film, the music sets the mood, is upbeat and tells the story. The entire story is told through the actions of the actors involved, and it definitely works in Dohard.

Overall I give this short, 7 minute blast of movie madness called Dohard a hard 9 out of 10! This is a great film for people who want to learn to make action movies. Even experienced film veterans can learn a trick or two with this one, and witness sultry Selina Lo!

The film is available to watch on youtube @ http://www.youtube.com/watch?v=sMhoZkGVwkM

Stunt Power films have an official site @
http://www.stuntpowerfilms.com
Posted by Dan's Movie Report-Danny Templegod at 11:55:00 AM