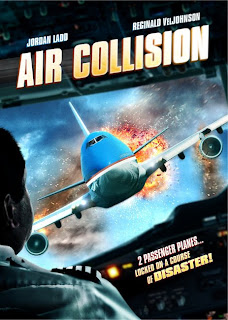 
Having watched a couple of dozen movies from The Asylum, I was wondering why they never really tried their hand at a disaster film. Straight from the pages of the Airport films of the 70s comes a half a decent effort with Air Collision.

In this disaster tail a new satellite radar system is activated. The system not only tells the air traffic controllers where the planes are it controls their elevation and flight plath. In theory this should eliminate human error, but apparently does not allow for easy override if the system should fail.

The system is activated, and there is apparently some sort of solar storm, although it is never fully explained, and the satellites begin to fall from the sky, not a couple but dozens of them, and they do not burn up in the atmosphere they fall to earth doing damage.

Air Force One, has the system, and during the malfunction it re-routs the plane on a direct collision with a smaller DC9 passenger plane. There is nothing the air traffic controllers can do as the solar storm has interrupted the digital communication to the aircraft, and disrupted the radar. that is one hell of a storm!

As far as low budget films go Air Collision is not bad, the acting by Jordan Ladd, is fun, even though at times a bit over the top. No one really stands out, but the film is not boring and there is a decent amount of tension.

The science is slightly askew to be kind as to cover up a gaping hole in the passenger plane is completed by stacking up carry on luggage, and apparently that is so tight that it can establish proper pressure in the cabin. Huh?

Overall night a bad effort, worth a rent, I rate Air Collision a 5 out of 10.
Posted by Dan's Movie Report-Danny Templegod at 3:10:00 PM