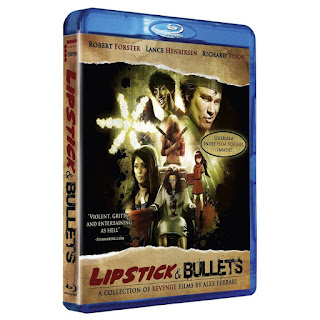 
It is time for some more short film madness this Easter and Passover weekend. Filmaker Alex Ferrari releases his four award winning shorts on one Blu-Ray! The film is available for the first time in the US on Blu-Ray on Amazon and includes several hours of additional footage!
Broken, Cyn, Red Princes Blues (Animated and Live action) are included.

I watched a screening of Alex's short film called Broken in 2004 in Florida, and I own the subsequent DVD release. That particular DVD has over 4 hours of additional footage, almost like a series of instructional classes on ultra-low budget film making. The detailed, informative DVD covers everything from special effects, to action and fight scenes, to story boards. I recommend this Blu-Ray as it has all of Alex Ferrari's four short films, plus behind the scenes.

The highlight of the disc is the 2010 film Red Princess Blues, the 11 minute short follows a smarmy carnival man threatening an innocent girl, but there is a rough lady (Rachel Grant) at the bar he underestimates, an epic fight ensues and unlike most bar fights, no one else wants to get involved, and the patrons go out of the way to place the tables out of harms way haha. Definitely one to watch hard to believe someone that cute and sweet like Rachel is capable of that level of viciousness. This film was only available before as an IPAD/IPOD App, as a non IPOD/IPAD owner it nice to see it get a proper release. Also included is the animated prequel shot in 2007 Red Princess Blues, voiced by talented and sexy Paula Garcés.

Also included on the Blu-Ray is a film called CYN, a mysterious dark tale, a five minute blast of insanity shot in 2007 in Florida.

Rather then hunting all of these down separately I feel this is a I valuable, quite convenient compilation and I hope it inspires other indie short film makers to compile their micro-masterpieces into in this fashion. Worth noting the Blu-Ray displays Alex's progression in quality of product I rate Lipstick & Bullets a solid 8 out of 10,
Posted by Dan's Movie Report-Danny Templegod at 8:24:00 PM