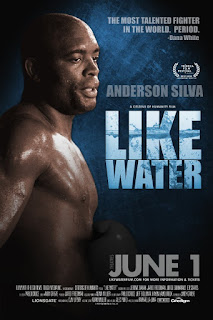 Above Pic Credit: Like Water Official Movie Poster from Lionsgate

For a UFC and MMA fan like myself I was eagerly waiting for the Anderson Silva documentary to come out. Clocking in at a tight 76 minutes the documentary  Like Water touches the insides of being a professional fighter and the heart and soul of the man behind the gloves. Anderson Silva gives his fans, skeptics and the media much material to digest throughout the films' short running time.

Like Water opens with his wife revealing that she got pregnant at 17 and that Silva has always been a good father, always providing, and that he promised one day to buy her a big house and fancy car. She laments about him having to leave for months at a time. Filming is done inside their home and shows a few tender moments for instance they are all huddled on the couch together, there is real love their, that is refreshing to see a man who can be so vicious in the ring can be so tender outside of it.

Like Water goes into the controversy with Dana White that one of his fights was not worth the money people paid. Dana calls out Silva and hand picks another opponent for him, basically wanting him out of UFC.

The documentary displays the humbleness of the man, not bending to criticism, just does his job and lets the pieces fall where they land. Like Water is an inspirational story and a sad one as during the training for one of his fights Silva misses the death of his grandmother.

This is one of the best fight documentaries in awhile, because it is not preachy, just tells the story, allows the viewers to make up their own minds about Silva. After seeing this, I can say  not only do I have a much better understanding of Silva, but I have a more solid grasp on what it is to go through the family sacrifices to chase the dream of a champion.

Overall I give Like Water an 9 out of 10, a must see, fresh and insightful! I sincerely hope all people thinking of going into the MMA area watch this and think long and hard about your goals and aspirations.

Like Water is available On Demand June 1st / The film is a Lionsgate Release.