Raze To Begin Production In June 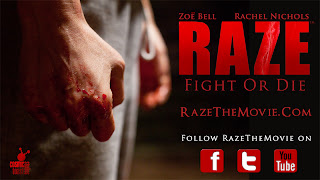 Raze will be a full on action/horror fest, with much violence and bloodshed. The Movie is billed "as a female Fight Club Meets Hostel!

The film focuses on two women abducted and forced to fight for survival. Raze follows their lives along with 50 others, in deadly bare knuckle duels, while rich socialites watch. The slogan for Raze is "Fight Or Die"

In The mean time slice your browsers over to the appropriate sites: