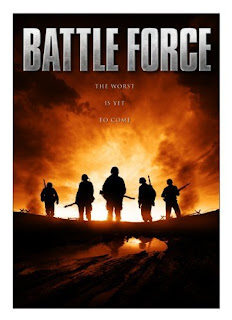 Above Pic: Poster for Battle Force

It is time for another independent war film review on Dan's Movie Report! Battle Force is a story about a WWII fighting force comprised of misfits and outcasts, from both Canadian and U.S. military. This force was trained in mountainous regions, and specifically designed to kill Nazi targets.

The movie opens when the squad is ambushed in a mountainous region. For the most part Battle Force is a "follow the squad" film. We watch them fire weapons at the Nazis, have relaxing time playing cards, and search for the often hidden enemy.

According to the official plot description in Battle Force, only one person in the group actually knows the mission plan, and there is a traitor amongst the group. Director/Writer Scott Martin does his best, with limited resources, most of the budget is obviously in the action sequences.

A wrinkle in this film is the addition of actress Stephanie Beran as Caterina. Caterina is not a weeping wife on the home front, but a soldier, who is violent and kind of crazy. She demonstrates this by killing a Nazi, without using a firearm, then wiping the blood on friendly soldier's uniform! I am sure that in the 1940s woman were not usually on the front lines, but who knows, as this is supposed to be a ragtag force. I enjoy Stephanie's portrayal of Caterina, she makes the movie more complex, adding a bit of tension and energy to the film. There is even a second female characater added into the fray towards the end.

For a very low budget movie, the costumes are not bad, a bit sparse though, settings are decent, again not much background material. The squad finds a large military compound and the audience is treated to various camera angles, giving Battle Force somewhat of a bigger budget feel. The problem being the scope of the film is just too bog for the budget

The plot in Battle Force is very basic, following around a fighting force day by day. Nothing that new, but adding a strong female character, if not factually accurate, makes for an somewhat entertaining, mildly amusing, 100 minutes.

Acting wise, well, for the most part average. Nothing to detract from the storytelling. There are scenes where copious amounts of dialogue is prevalent, and at times seems a trifle forced.

Overall, I thought Battle Force is only worth a rent. Perhaps a purchase, only if you are a war film buff, that doesn't mind a bit of creative historical license. I rate Battle Force a 5.5 out of 10.