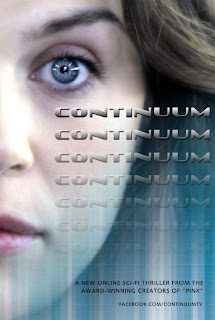 My interest in science fiction goes as far back into my childhood as I can remember. Curiosity and discovery are two elements of this genre that have attracted me, and quite frankly most sci-fi shows today have too much fighting, mindless action, and steer away from these attributes. As the advances in technology have furthered in the last 1/4 century, so have the budgets for science fiction TV shows and movies, often reaching millions of dollars per episode, and pushing the 200 million mark for theatrical films. It is quite rare that a low budget sci-fi undertaking exudes the technological and artistic achievement, along with distinct intelligent story telling as Blake Calhoun's web based Continuum series does.

Not to be confused with the Canadian TV series, this web based Continuum opens with lead character Raegen awaking from a slumber seemingly alone on a spaceship. Although it evokes memories of Alien, Raegen, played with vim, curiosity, and energy by Melanie Merkosky has no recollection of why she is on the ship and how she got to the location in deep space. Melanie is a wonderful actress, not only is she attractive, having a distinctly clear speaking voice, she has obviously had extensive training in how to react with her eyes, and body language. I captured this image below as she is discovering her surroundings on the ship, almost wondering in amazement, yet confused. By clicking on the picture it can be made wallpaper sized. 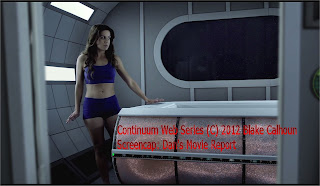 The audience later finds out that the ship is controlled by a computer, voiced by Taryn O'Neill. The computer tries to assist Raegen in her quest to piece together her life, but even the computer itself is damaged, thus setting up an intriguing beginning to the series.

Further into the season Raegen discovers that she is not the only one on board. She meets Tipton, played by Brad Hawkins. Tipton also has a bout of amnesia, but his memory is returning at a faster rate, and the computer believes he is a mercenary set to kill her! This is a good plot complication, and can be taken in any direction, and Brad is a good choice of actors, showing compassion, yet looking like he is hiding something. Below is the Image of Tipton, portrayed by Brad Hawkins. 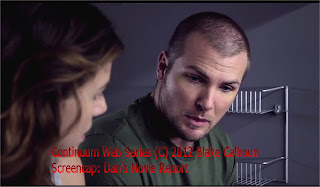 Everything from the plot, settings, background, CGI and acting are very professional, and I am sure with a full scale budget, this could be made into a series or feature length movie. Melanie is a great actress to pull off the lead character, and by having her start out with amnesia, her abilities can be slowly developed like in The Long Kiss Goodnight. With a solid premise and the boundless possibility direction I can easily envision Continuum having a long series TV run.

The first season of the series was filmed in 9 parts, each part running approx. 5 minutes.  A second season is planning to release this fall.

For more information on the Continuum Web Series, and how to purchase the entire first season, visit the official website @  www.watchcontinuum.com  or the official facebook page @ www.facebook.com/ContinuumTV

I rate the series a solid 8 out of 10, and am looking to see more from these talented people.