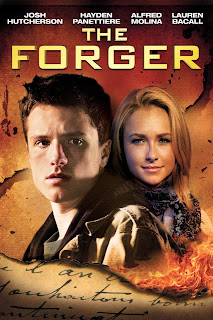 Above Pic: Poster for The Forger

Doing a little research, I found out that this film was actually shot on a 24 day shooting schedule in 2009 before the release of The Hunger Games. Actor Josh Hutcherson hones his acting chops in this drama revolving around Art forgery and how one is lured into it.

With the sometimes lack of originality in Hollywood, I enjoyed the intricacies of the plot of the Forger, although I wish there was a bit more on the action side, but this is strictly a drama. Hutcherson plays Joshua, a young kid with a gift, not only is he a good artist, but he has the ability to copy paintings. He is a good artist in his own right, but is shown the cash he can make if he forges masterpieces and sells them. 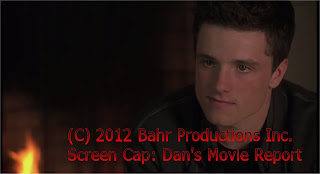 Josh Hutcherson is hungry, not for killing, but for art in The Forger (C) Barh Productions Inc. Screen Cap: Dan's Movie Report

For a film that only took 24 days of principal photography I am quite impressed how the scenery and background are so detailed, and every attention to the setting is portrayed and sets the mood of the complex characters. Characters move from scene to scene with little effort, thus making for a rather impressive film from the technical aspect.

Lauren Bacall and Hayden Panettiere do a solid job in their roles as Anna-Marie and Amber respectively. This is a well acted drama not over the top preachy but exposing the lucrative but sordid world of art forgery.

I rate The Forger a 6.5 out of 10, wishing there was more plot action, a longer running time than 96 minutes to flesh out the characters,  but well worth a 3.99 amazon rental.
Posted by Dan's Movie Report-Danny Templegod at 4:38:00 AM