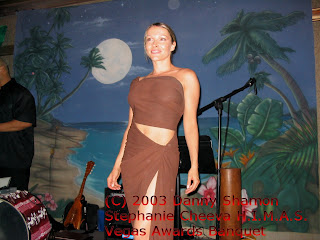 
Hailing from Bulgaria, Stephanie Cheeva made a name for herself in her early years as a decorated martial artist, in the mid 90s she made the big move to Hollywood, to pursue her dream of acting. Fast forward to 2012 she is starring in a cool new movie called Black Cobra, and has put forth an extreme effort and dedicated her life to end child sex trafficking and with her husband Kelsey created Love Never Fails World Charity. Stephanie is a truly loving individual with a unique story to tell, no more of my rambling, on to Stephanie in her own words.

Big changes in your life, since our last interview in 2003, what made you decide to create Love Never Fails World Charity?

I heard about child sex trafficking for the first time and I couldn't believe that such evil existed. I learned that there's an organized commercial child sex industry, in America and across the Globe where kids are raped 10 to 20 times a day. The average age is 6, but there are some as young as 4 months old, sold for as little as $16US. My whole being was shaken... I kept looking at my own kids - 7, 4 and 2 - and felt sick when I would imagine what an intercourse would do to their little bodies, let alone their spirits. I couldn't sleep for weeks, and I was haunted by what I now knew. The more my husband and I learned about child trafficking, the more clear it became to both of us, that we couldn't live with knowing and not doing something about it. Thankfully, we also learned that there are solutions to the problem and with God's help we want to spread the word, and inspire and equip people to take action. That's how Love Never Fails World Charity was started. Big thanks to Dan's Movie Report for doing your part and supporting us by putting a permanent banner up on your site and helping us reach more people!!!


Having children of your own made you realize the plight of kids worldwide?

Definitely! Having kids of my own has given me a big heart for kids in general, just by witnessing how loving, and trusting, and pure they are, and filled with wonder. And that's taken away from them when they are systematically abused and raped. My husband and I are Christian folks,... and talk about "Love your neighbor as yourself"... heavy.... I don't know that I can love all of them as I love my own kids, but there is definitely a very authentic commitment that's taken a permanent place in my being, that for as long as I'm living I will not stop doing my best to help stop child trafficking. I know it's the same for my husband as well.


Organizing events such as Jeremy Lin The Musical for Love Never Fails must help raise awareness, are there any more events upcoming?

Yes, and yes:) Having artist come together and do what they do best for this cause is so powerful. We are very grateful to Aden Park for initiating the whole idea of the musical and putting it together. People were definitely made aware, and then inspired to do their share to stop child sex trafficking. It's such a beautiful thing to see, because they feel empowered to be able to make a difference and they feel good doing it, which in turn becomes contagious and others want to join in. It's like this movement, this powerful wave that's being created... It's amazing! My mind always goes to the thought that the ocean is actually made of drops of water. Sometimes we may see ourselves or our efforts as insignificant, but an ocean of those efforts becomes overwhelmingly powerful. Child trafficking is a 32 Billion Dollar industry, second only to drugs and the fastest growing. But I'll bet you, that for every one person who benefits from keeping this industry growing, there are ten of us who feel strongly about stopping it. The key is to unite. Having events is a great way to do so. We have a few that are coming at the end of the summer and early autumn, and we will keep you posted on details. We are also launching a photo campaign in October, where many volunteered to come and model for us, give interviews, etc. We are big advocates for community involvement and are very grateful for, and in need of people who want to come and help us put it all together. If anyone who's reading this article feels lead to join this movement, we'd love to hear from them, wether they have thoughts, suggestions, or want to come hang out and help in anyway. They can contact us through our website - www.LoveNeverFailsWorldCharity.org
One thing they can do right now, is go "like us" on Facebook, or tell another person about what we're trying to do. 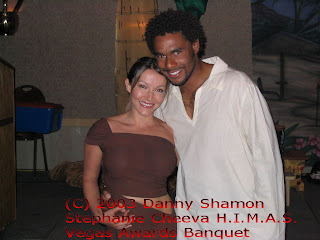 Above Pic: Stephanie and Kelsey in 2003, (C) Danny Shamon

What is the most difficult aspect of running a charitable organization?


The endless hours of work, on top of working to pay the bills. But again, it is also very satisfying. There is joy in knowing you're making a difference.

On to Black Cobra, how did you get involved with the project?

I was approached, at one of the Martial Arts celebrity events, by a person I didn't know - Sebati Edward Mafate - and he said that he's written a novel and has adopted it into a screenplay, and he wants me to be in it. I had just given birth to my first child, so I was like: "Yeah, sure.... It'll probably never happen..." So it started out as a joke, but took a life of its own. I told my friend Lilly Melgar about it, she told her friend Mark Jacoby about it. They became executive producers and brought in the money. Than Scott Donovan (director) and TJ Storm (starring) also joined the team. We have all been friends for years. And to top it off Reuben Langdon and Ken Ohara from Just Cause, with whom I had worked for many years, came in as stunt coordinator and action director and brought A-list stunt performers to do their magic with the fight scenes. Our luck didn't stop there, through Scott's contacts we've had the incredible privilege to have the Kami Asgar, Tim Tuchrello, Sean McCormack team - two times academy award nominees, Emmy winners, Golden Reel winners- to do the post production for the film. All that culminated in a Lionsgate release of the movie on May 24th of this year/

Must be fun to work with friends T.J. Storm and Lilly Melgar, does being friends first sometimes put more pressure on you to do a good job with the film?

Well, we've all worked together on many projects before, and that familiarity helps a ton. Plus, it's fun to work with friends. We all wanted to our best for each other as well.

How long was your portion of the film production?

Pretty much from beginning to end, but heaviest during pre-production and principle photography.


One of our locations was in the city of Pasadena. We didn't know it at the time, but filming in Pasadena is a bit less expensive, but as intricate as filming in Beverly Hills. Mind  you, we are an ultra low budget sag film, and we had to get a ton of different permits for every little thing we were going to do  and had to collect signatures from the neighbors in Pasadena in order to even be considered for a permit! Well, we did it all and of course a on the day a piece of equipment was being temperamental while we had all these elaborate set ups of balsa wood furniture and doors, sugar glass and fire for our night shoot stunts. We didn't get the shots and we needed to come back the next night, but there was no way we could get the permits in time and it was the last day of filming and our very last budget. So some said - "Forget it. This is my cousins house. I've lived here for years and my neighbors are cool with us filming. Let's just get the last shot, or you guys don't have a movie." So we started filming and sure enough the police and the fire-marshal  showed up at the door. We knew they were going to shut us down, and in desperation I asked Lilly to meet them. On top of her beauty, she has been a professional on camera host and really has a way of disarming people through her interviews:) By the time they were done talking to her, we got our shots. I think that was as "gorilla" as we got during the principal photography. We really tried to do everything by the book.

Is it enjoyable to be back into the action film realm again?

Yes. It is something that I do well and seems natural and easy, so therefore, enjoyable:) 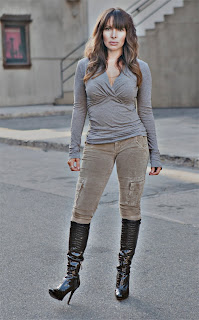 How about regrets or negative aspects of Black Cobra, any problems arise, were you completely happy with the final project?


After each project you do, you learn so much and there's always ways to improve. I would do some things very different on my next film. But knowing what our budget was, a lot of experienced filmmakers told me: "Good luck! But you'll never be able to do an action film for that much." We did. And we paid our actors and we paid the crew and we finished the film, AND we got great distribution. I'm very proud of that.

Any more plans to collaborate with Lilly or T.J. on other Projects?

Nothing truly tangible quite yet, even though there are some talks about a Black Cobra sequel. 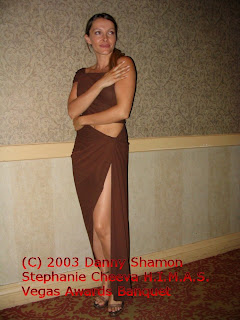 What is next for Stephanie, more movies, MoCap work, etc...

I am truly committed to make an impact against child trafficking though the media I produce. After we traveled to South East Asia to see first hand what is happening with the trafficked kids there, as well as visiting some of the safe-homes, my husband and I made a short documentary called" Healing Kindness", which is currently submitted to the Burbank film festival. My next projects are a full length documentary and an action thriller entitled "Pure". To know more, you can check out: www.ThePureFilm.com


Watch for more on Stephanie, exclusively on Dan's Movie Report! 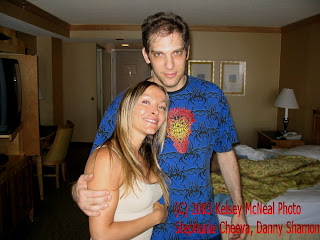