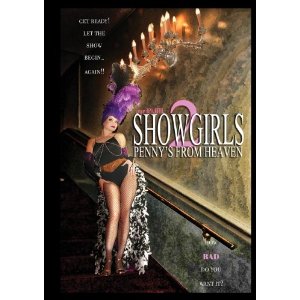 
This film came clear out of left field like a curveball. Following the release of the first big budget Paul Verhoeven film the rights to a sequel have been up in the air. Actress Rena Riffel who played Penny in the original film has actually created a sequel loosely based on her character, giving some sort of a back story. All Screen shots are able to be made into wall paper by clicking an enlarging. 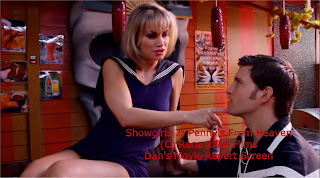 
Ironically this film has more substance than the original Showgirls on merely a shoe string budget as it pokes fun at various aspects of the showgirl industry including the seedy side of audition, and the cut throat business. I first saw Rena Riffel in a very provocative film called Undercover Heat with Athena Massey. Her salacious humor is refreshing, in that film, and actually her acting ability is pretty solid. Penny's From Heaven is a two and a half hour showcase, actually produced by Riffel herself. As an independent writer I respect anyone going about it virtually alone. Riffel did have a small roll in Mullholland drive and Penny's from Heaven has some influences with that including a bit of violence mixed in and kinkiness. 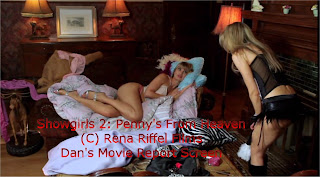 
Penny's From Heaven opens on the seedier side of Las Vegas, Penny has a warrant out for her arrest, is shown the door by Actor Glen Plummer's character and she begins her unending journey to Vegas stardom. Her journeys range from lap-dance auditions on a pool table to full choreographed dance numbers.

Penny's From Heaven focuses far less on the nudity and sex, then the actual process of trying to become a showgirl. Don't moan this, actually this fact makes for a more entertaining film in-spite of the extremely limited budget. There is nudity, but the dialogue drives Penny's From Heaven, and actually is quite clever at times. 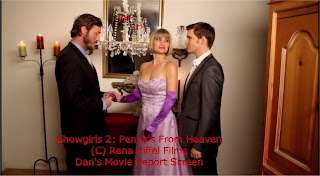 
Penny is convinced that ballet lessons will further her career. Penny's from heaven turns to a deeper social commentary, than Verhoeven, all be it a more sardonic one. It has a campy feel, like a twisted David Lynch film, on the one hand, like an Andy Sidaris film on the other

Overall I like this film, my one major complaint that a two and a half hours is a bit long to sit through, but there is enough material to provide some laughs, some titillation, and a somewhat unusual look into the life of a showgirl just starting out in the business, thus offering a new perspective.

Showgirls 2: Penny's From Heaven rates a 6.5 out of 10, worth a rent and is available now on AMAZON video, check the link below. Also visit the website @ http://www.Showgirls2movie.com