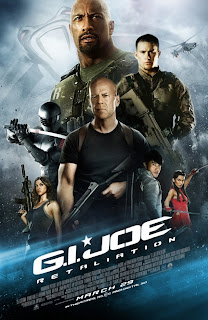 Above Pic: Poster from G.I. Joe Retaliation
(All pics can be made wallpaper sized, by increasing the size in windows, left click, right click larger image and select view image and bam Wallpaper from Dan's Movie Report!)

Last year when Retaliation was delayed it was disappointing, as much summer promotion for it, I pointed out though to my friends that the season was too crowded. Getting a jump start on the Summer in 3d, and opening to over 130mil, no surprise the sequel is already green-lit.

The president is captured by and impersonated by Cobra. The Joe's are sent on a mission to capture a rogue nuke, and boom all that is left is Roadblock: The Rock and two others, including Jinx Adrianne Palicki . With the recent allowing of Females in combat was refreshing, using cunning and intellect do get the result.

Is Retaliation full of detailed stories and complexities, no, but the action is so mind crushing that more than makes up for some oddities. The humor is thrown fast and furious in the beginning, things get decidedly more serious towards the end. 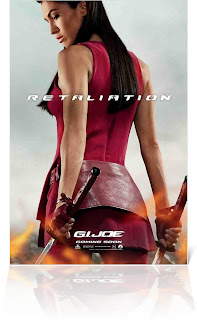 Above Pic Poster of Elodie! Ready to retaliate! (C) MGM


The use of swords and bullets worked, the action was so tightly choreographed, obvious time was taken in each scene development.  My favorite scene in the film by far is the action sequence on the mountain side, (in the trailer). Like a Monet Painting Stuntwoman Ming Qiu effortlessly flies through the air like a lithe bird full of anger and swords. Elodie Yung while rather quiet, speaks with her swords, trained by Ming her moves were crisp and aggressive. Tara Macken also had a hand in doubling Elodie. Watch for more on Dan's movie report about the ladies of Joe!

Regarding interplay between The Rock and Bruce Willis; a rip roaring testosterone fueled romp to watch. The sardonic quips,  violence initiation, and mention of cholesterol, to a sultry Jade, just made the film flow. Technology and swords don't usually work but here it the mix is like fine wine and filet Mignon, with the beef belonging to The Rock!

Villains, heroes, and legendary Martial Artist James Lew as the Chinese Leader in a cool cameo. Joe has it all and flaunts it!

In short, G.I. Joe has an ultra cool indie feel on a 150 million budget, I loved it! Is is accurate, who cares, all I care about for Joe is the action, and If it is swords you want swords you will get, See it or die by the blade! I rate Retaliation 8 out of 10 on the sharpness scale!

For more on Ming Qiu visit her official page unless you are frightened!  http://www.stuntming.com/