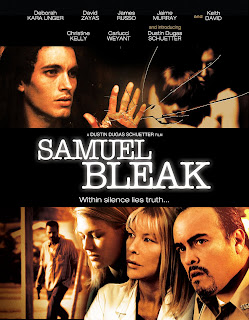 Samuel Bleak is the sordid tale of the son of a writer and a drunk Vietnam vet, living a life in hiding as an outcast. In the opening scene Doctor Ramirez (Deborah Kara Unger) and her senile are mother chatting, soon her mother sees Samuel Bleak scavenging amongst wood scraps in a clearing.

We later learn Samuel is a recluse, hiding in the woods, in a small shack with an old typewriter. He does not speak, but is not mute. He is writing a book, eventually he is discovered by Ruben Ramirez, a local police officer, husband to Unger's character.  Ramirez has a heart, and tries to help Samuel Bleak, tries to get him to eat and get help for his situation. 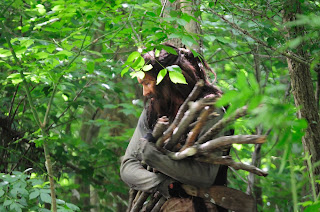 Samuel Bleak's Father Charles, portrayed as an abusive drunk, masterfully with Zeal by James Russo. In a flashback he bursts through the door grabbing a sloppy kiss from his wife loud and belligerent and he exclaims, I am sorry son I forgot your birthday, and slams a large Knife on the table and says happy birthday, not before forcing Samuel to close his eyes. Samuel Bleak's Mother was a writer.

Sadness exudes from Samuel's Eyes, as he has seen so much hatred, anger from one parent to last a lifetime. Samuel is admitted to a mental hospital after he does not eat then, the film truly begins. 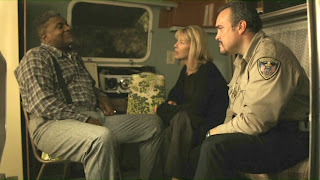 
Anger, love, consternation, hope, dreams, and a reflective look inside the creative tormented mind. Samuel Bleak is full of great acting and a thoughtful storyline, not only did the film hold my interest, I was thinking about it after the credits crawl. Auspicious, daring, bold, and inventive, while wearing three hats: writer, director, and star Dustin Dugas Schuetter brings an amazing effort to the screen, and enlists some experienced and ultra-talented actors in Unger, Russo, along with newcomer Christine Kelly as Kat, (whom Bleak befriends in the mental institution). Kelly brings an almost childlike innocence to her suicidal character, refreshing to watch and poignant.

The creative team behind Samuel Bleak are: Tom Conigliaro, Kevin Pugliese are
(Executive Producers), with Bernadette Dugas Producing. Carlucci Weyant is the Executive Producer, Producer, and Co-Developer of Samuel Bleak. The group obviously work well together and have come up with a professional independent film that should easily garner an audience on a major network, and be successful on the home video market. Split Vision Entertainment and Aria Relic Pictures are the companies behind the production.

Samuel Bleak, is not a fast paced film, but thoughtful in approach and direction, and artfully filmed. A worthy effort,  I rate Samuel Bleak an 8 out of 10.

For More info on Split Vision Entertainment go to:  http://www.splitvisionent.com/sve.html