Recently there has been an explosion in the popularity of the web series genre. The rise is exciting and dynamic, and allows for independent producers and directors to hone their craft, gain exposure, and possibly sell the rights to a network for distribution. Some series even have millions of views like Mortal Kombat: Legacy. Watch for more coverage on web series upcoming in 2013 on Dan's Movie Report, but first up is Humber City.

Check out the teaser trailer for Humber City on You Tube:

Click the following link for more promo videos from the cast of Humber City  http://www.youtube.com/user/LimitedFaith?feature=watch 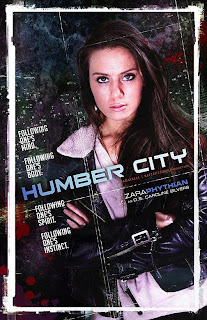 Plasmafire Graphics are continuing the endeavor on creating new posters for Humber City in anticipation of the first episode of Humber City. This all new one sheet features Zara Phythian as DS Caroline Silvers - http://www.facebook.com/humber.city

Show Discription: A British crime drama web series with character, action, conspiracy and political unrest. In a city desperately in need of hope and salvation.