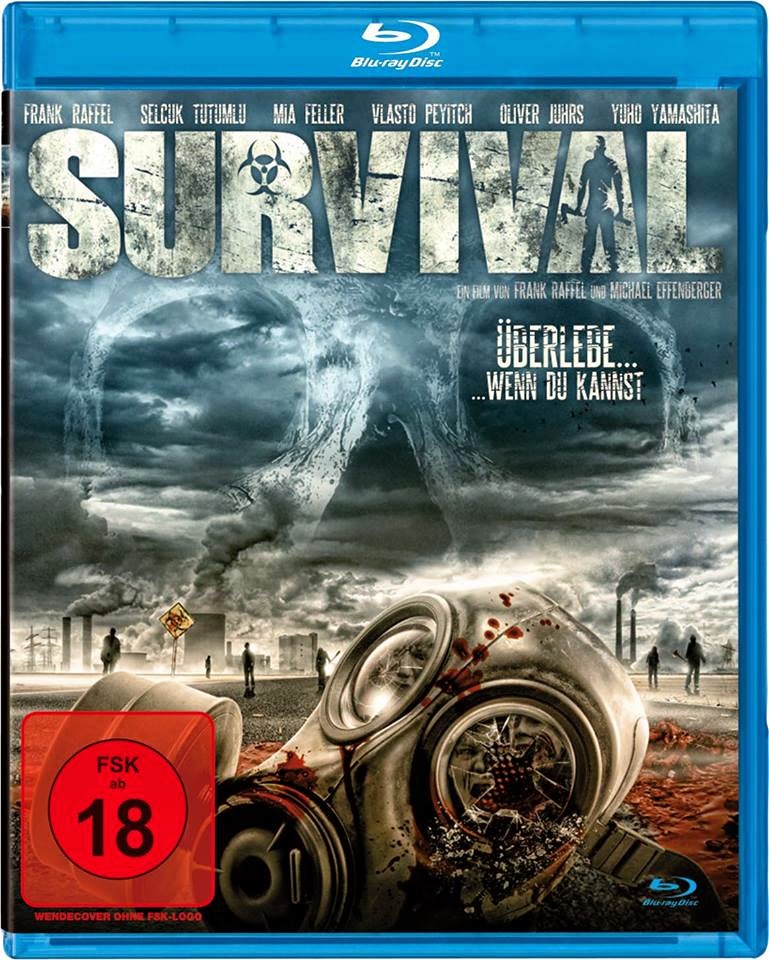 It has been a while since a film review has appeared on Dan's Movie Report. Time to change that and go inside the twisted minds of Frank Raffel and Michael Effenberger and their crazy take on the zombie film world 'Survival'. The film begins in a research laboratory, where a new serum is being tested though the audience is not let on what exactly it is comprised of, or what it does. A rather clumsy research assistant accidentally drops the two vials, they shatter, and she turns into a blood thirsty creature. Oddly, this happens almost instantly, perhaps from the shear amount of the mixture that enters her system. The doctor in charge of the lab narrowly escapes to the bathroom with his research.

A separate plot of a young girl named Susan Roberts (Yûho Yamashita), who we soon find out is the adoptive daughter of the man responsible for the release facilities is kidnapped, by people who used to work in one of his labs and want him to shut the facilities down. Her father hires Frank Mitchel (Frank Raffel) to find his daughter and bring her home.

Above photo: Susan and Frank share a moment of quiet in 'Survival' (C) 2013 Matador Film.

'Survival' is one of those, they move fast zombie films, and they can use weapons and also elevators! Yeah it is a bit odd, but the highlights of the film, are some very cool quiet creepy parts, good jump scenes and excellent fighting scenes. Frank Mitchel is and ex-Seal and knows the ins and outs of all forms of fighting and use of weaponry. Actually 'Survival' is an action film with zombie elements thrown in. The movie had no boring parts, but there are intended, creepy, jump scene portions, and parts of the film that reveal more of the plot, that are mellow. When the time for talking is over, the fists fly, and in 'Survival', they are turned loose many times.

The zombies are more infected than actually un-dead. In 'Survival' a shot to the temple seems to do the trick at killing them once and for all. The two separate stories in the film intersect mid way through, and the audience soon learns what is planned with the research, and trust me, it is horrible.

'Survival' has a few flaws, never explaining really how or why some people turn right away and some take up to 24 hours to reach the crazy zombie state. In addition, the film never really explains the research behind the serum, just a small bit behind the usage. If there was a few moments of background research in the initial lab, the audience might grasp what is going on, prior to the reveal much later in the film, perhaps it was not as crucial to the story, but might have made for a more "urgent" need to find out what is going on. The acting in the film is decent, but some actors needed to put forth more of an effort. The fighting scenes are very good, but the excessive yelling and grunting was a bit odd, perhaps the ADR was over done a bit, hard to tell.

Is it like 'Resident Evil' yeah a bit, but the story has a personal element to it, with a father-daughter connection. I enjoyed 'Survival', not the greatest zombie film, but a decent effort. 'Survival' rates a 6 out of 10, definitely worth a rent.