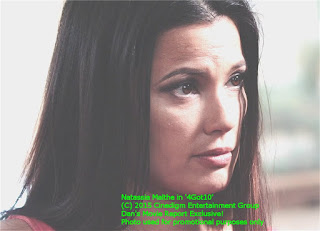 Greetings valued readers, time for another interview on your home for exclusives, Dan's Movie Report! Natassia Malthe's diverse career in the film world has taken several twists and turns. From playing Typhoid in the original 'Elektra', to Brynna in 'Vikingdom' , she has made her mark in action, and drama. Fast forward to 2015, Natassia brings passion, forcefulness, and verve to her latest character Christine, in '4Got10'. She plays a bad girl in this film and is brutally honest in her interview. Grab a cup of tea, while Ms Malthe, drops some knowledge....3-2-1. Go! Incidentally, if you have not read her two other interviews on Dan's Movie Report, kindly check those out as well!

How did you get the part of Christine in '4Got10'?

I got the part through my friend Michael Pare. I have done many movies with already. He vouched for me. Thank you Michael! I really appreciate it when actors support other actors, especially in such a self centered driven business.

Yes, it is always important to support others, that is cool, it is good at times to skip the arduous audition process. What attracted you to the script?

It felt like a gritty film that I could have fun with, which I did. The characters in '4Got10' seemed fun to play, and I had never done a character such as Christine before.

Yeah I noticed that your character haa a cunning, devious side, and very likable, hahaha. In addition, I noticed very cool indie people worked on the film, did you have a chance to chat with Dolph or Danny Trejo during the production?

I spoke a lot to Dolph because we have worked together before and laughed about our last experience together. We were both going through endings in relationships and we both looked older in our last film because of the personal stress we both had . I did terrible on that film and my acting was the worst . I was experimenting on something that did not work. Obviously, my break up at the time did not help my judgment of character.

I met Danny in a Mexican restaurant before shooting right by set. I was too shy to say hello and introduce myself, right then, but later that day I did. It was kind of dorky but I asked him for a picture of him and I and then forgot to get one . He was very nice.

I think you are a natural in films with the two of them. Any unusual stories on the set of 4Got10?

I brought my old boyfriend John Foo on set, and they gave him a job on the spot, right before he booked the new show Rush Hour. He was straight off the boat from Thailand broke so it gave him some pocket money while he was testing for Rush Hour. Obviously, John won't be in that position again. We were all very happy when he booked Jackie Chan's character in the new show.

Another story: This was my first movie as a mother. I had recently gave birth to my son William, and I was calling babysitters on my minutes off camera, stressed out of my mind. I barely had sleep while filming the movie and I think I felt pretty off with my body. I was very sick the day of the sex scene. I had food poisoning, great timing...

Wow, now that is a crazy story, and proves that you have to put aside issues, when the camera rolls.. How to be romantic, when doubling over in pain, Natassia, that was a great effort. Shifting gears a three part question, How much input did you have on your character? Were the director and producer open to your take on Christine? What did you think of your character, anything you would change?

I had a lot of input because a lot of it was improvised. I really like to do that. You don't have to feel restricted by text that way . The director Timothy was very helpful too. I really liked my character, if I would change something it would probably be my hair and make up and perhaps the out fits I chose to wear.. maybe it would've been even more fun if i played even more bratty. Bratty is funny to play.

You make a great brat! Natassia, I must ask, some more sexy scenes in '4Got10', is the prep any different than the salacious stuff in an Uwe film or, just go and get it over with? Do you prepare differently with each actor on each film?

I did not prepare for that scene. I was too busy worrying about food poisoning. I was however less worried about the scene then Uwe's sex scene in 'Bloodrayne: The Third Reich''. In that film I did the sex scene Uwe Boll made me do without my desire to do it, I called my agent, but he was sleeping on the other side of the world . I held up production freaking out, and I had a screaming match with Uwe about it. It got so tense on set. I caved in and eventually did it, as I was holding up production and could get sued. I don't know, but I wasn't happy about that scene.

Thanks for giving me the honesty, respect, let us end this interview on a positive note, What is next in the movie realm for Natassia, new films or projects?

My next movie is Four Towers I think. We are waiting for all the schedules to click. I am in Australia right now so auditioning is a little scarce.. I will know more about what to do with my career from Australia when I get better acquainted with the scene here...

Natassia, I can always count on you to be straight forwad and honest For my Dan's Movie Report readers, watch for more on Natassia, as each production she works on a new interview will appear!

Thanks Dan always good to hear from you:)
Posted by Dan's Movie Report-Danny Templegod at 6:05:00 PM