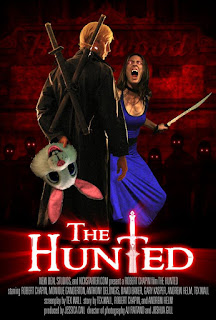 Greetings Dan's Movie Report valued readers, time to veer away from the serious and the mundane to the tongue and cheek vampire film 'The Hunted', Director Robert Chapin, who also stars in the film as "Bob" spins a tale of righteous vampire slayers all in a mission to film a movie, all the while searching for "The Chosen One".

Watch for Monique Ganderton as Susan. She is of course a good girl, we learn later (minor spoiler) she is a slayer. Monique makes the transition from stunts to lead actress material with ease. In a comedy such as 'The Hunted' it is important to have comedic timing and she does.

Eventually our story leads to training a ragtag band of misfits and untrained fighters to battle Dragos (Gary Kasper). Watch for copious lines from various movies and poems ranging from 'Scarface', 'Independence Day' to 'Shakespeare'. The put downs and silliness ensues, along with a vast library of action and even a amazing high fall, in a sparse, yet special outfit! HA!

Oh I loved the politically incorrect insults and dialogue. Example when trying to escape from an explosion a particularly brave character who does not want to go down the garbage chute Star Wars style says "Screw it, I would rather take my chances with the bimbo." On the other side of the door, Lauren Kim, who is a very cute, petite and crazy vampire yells "I heard that" and bursts through the door, with evil red eyes, dressed in black. Sexy Vampire slayer Michelle C. Lee is given the classic line "So you have returned for more sex.?" Bob responds "No just looking for my wallet"  Finally last line I have to mention is the creature they are hunting is and I quote: "1/2 human 1/2 vampire and the other 1/2 an armadillo". Ok that is the type of dialogue you can expect, and if you like your sarcasm like I do, it is hysterical.

With many of the actors in 'The Hunted' mainly stunt people, the action is fast and furious, at times over the top, but always brought back home with clever dialogue. Tara Macken, with her character Wendy dressed like an alternating striped mix of Harley Quinn and a crazy school girl from 'Battle Royale' has loads of action. Her preferred method of attack is to jump into the victims arms and writhe around sexually. Not sure how this is dangerous, but I guess you could throw out your back if not expecting it, but Tara is pretty light. In fact it must have been hard for her to pretend not to kick ass, like biting your tongue when someone is insulting you.

There is of course oddities like a 12 step program meeting for vampires and a guy who is almost as crazy as me! This distinguished gentleman has a straining bowl stuck to his head, complete with a pizza cutter, and wire wisk glued on, I see so much of myself in that character, I envy the guy. Actually he is used by the team for information gathering and his on the street knowledge. Perhaps strained through his head with the holes in the bowl, and the pizza cutter extracts the useless material?

I noticed they filmed a bit on the street by the Chinese Theater where people dress up, and charge for pictures, and the characters poke fun at that. Obviously this was a fun project, and a culmination of years of Chapin's The Hunted series on Youtube. The accoutrements of 'The Hunted' lighting, sound, were high quality, and with Chapin working on VFX for big films, the special effects were pretty cool for a total indie.

As a side comment, and with all of my action oriented reviews I throw my hat in the ring and #Standupforstunts and firmly believe that this needs to be included in The Academy Awards. Support stunt people worldwide, they take the hits, hard falls, with a minuscule amount of screen time and recognition. Quite frankly, they have some of the most interesting stories to tell. Lauren Mary Kim is a top notch action lady now, as she doubles Elodie Yung as Elektra, check her out here as the Sexy Shadow Vamp!

Well there you have it! Is "The Hunted' high art, why yes, a bong is used apparently filled with spice! Is 'The Hunted' full of cliche phrases?  There can be only one! Who is the 'Chosen One'? Director Robert Chapin mentioned to me about a drinking game where every time the words "The chosen one" are said you have to do a shot. Trust me if one does this, the only bottle you will see is an IV in 'General Hospital'. Overall I rate this slick, sexy, slice of RED camera mayhem, a 7.5 out of 10. For the lovely  ladies; Monique, Michelle, Tara and soon to be Lauren who I have already interviewed, well played, keep up the humor. For Tara, your outfit alone had me in stitches, keep on jumping on people, someone will eventually fall over hahah!

The film is available for purchase now on Vimeo @ https://vimeo.com/ondemand/thehunted
Follow the crazy indie story online at https://thehuntedtv.wordpress.com/category/internet-epic/?order=asc


Join us! Create your own episode and win $1000 - http://www.thehunted.tv/frameset_affiliate.htm
FB group @  https://www.facebook.com/groups/thehunted.tv/