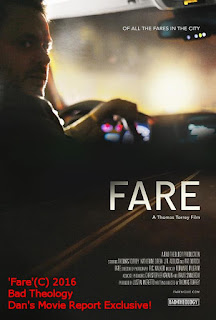 
Greetings Dan's Movie Report readers, fresh new film 'Fare'. Actually thanks to a connection I am viewing the film prior to the premiere, which is Tuesday April 26th. This review will be not only spoiler free but truncated so as not to give to many details about the film.

Essentially, 'Fare' is a character study and takes place inside a cab driver's car, according to the film's PR man Justin, the entire film was shot inside a moving car in only 3 days!

We meet a business man, eccentric man, a couple etc... Each person shares their unique story, and what a tangled mess is woven. From the mundane to the sublime everyone has a story to tell in 'Fare'.

Each passenger shares their desires to Erlc ( Thomas Torrey ) who also is the film's director and writer. The film takes a decidedly dark turn about half- way. The harsh reality in a mental anguished state is explored. Undulating and dialed in, 'Fare' is an important road film with eerie ideas and monumental. Thomas is a solid actor. Also mention goes to Katherine Drew as Audrey. I loved her as the wife caught in the middle. Katherine seemed the most natural in her lines and delivery. J.R. Adduci as Patrick also has a prominent role which I will not spoil.

The music is underlying and sets a tone of foreboding but never over powers. 'Fare' is more thriller than horror, more mental than physical. Look for symbolism and a variety of elements to increase the crescendo till the end.

Overall 'Fare' is a solid effort from the North Carolina film maker, with very minor quips on the ADR, and other aesthetic aspects, that are obviously due to budget and time constraints. 'Fare' rates a must see, and a 7 out of 10.