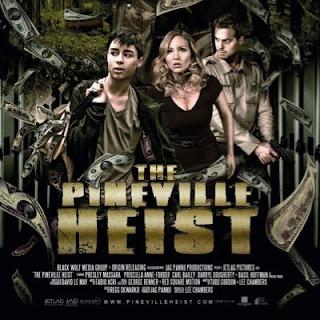 
With special thanks to Sharry at Darkwater, I obtained this screener of 'The Pineville Heist'. The film follows the life of a high school student, who happens to be the son of the most powerful man in town. He is witness to the stashing of a bank heist stash in the forest and witnesses a murder as well. The taught thriller moves from lush forest to the local high school where Presley Massara as Aaron Stevens and his teacher Priscilla-Anne Forder as Amanda Becker, play a cat and mouse game with the real dangerous thief and killer.

The movie opens with a lush scenery, but the town is apparently bankrupt. Business magnet  Wayne V. Johnson portrays Derek Stevens the father of the boy and he is put in charge of redevelopment money. Of course the money is stolen, and we have a cool plot, wrapped up in an 81 minute time frame. The Pineville Heist captures just enough intrigue and suspense to keep the viewer engaged. Erie music, adds to the thrill of the chase and hide.

Perhaps the best aspect of the film is lead actress Forder, as she has to go through a myriad of emotions. She at times turns as the aggressor, but other times the victim. She displayed emotion throughout and has a firm grasp of the script. .I am sure The 'Pineville Heist' is a stepping off point to her career. I just thoroughly enjoyed her dichotomy performance, and felt the need to point it out.

Massara as the high school kid, is sympathetic, and really has cool on screen chemistry as a friend to his teacher. They are forced to stick together. The two are slinking around the school trying to get away, and the audience is treated to a room to room thriller.

Overall 'The Pineville Heist' is a solid film. A few minor quips, regarding some of the dialogue in the middle, seems to get a bit talky for a thriller. Once the action starts it is pretty wild, and quite entertaining.Writer/Director Lee Chambers has a sleeper hit on his hands.

The 'Pineville Heist' is worth a watch and is making the festival rounds currently. Check it out, The film rates a solid 7 out of 10, and watch for some pretty cool action, and acting from Priccilla-Ann!