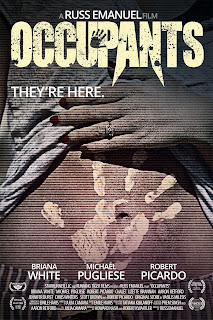 
Before I start this review a full disclosure; I was given special permission from 'Occupants' director Russ Emanuel to submit this early review. 'Occupants' has several convention screenings throughout the U.S. this year, which I will link at the end of the review text. In addition, I submitted an unpaid testimonial video for the Peterson Research Institute, my dialogue is not used in the completed film, thus I have decided to review based on the distinct merits of the 82 minute production, instead of recusing myself from review as I did in 'Rock Of Ages'.

Intrinsically, 'Occupants' is a study of reality for the erudite. 'Occupants' forces the watcher to be engaged in the story at all times, and assumes the viewer is an intellectual sci-fi and or horror fan. There is no blood and guts, no murder, maiming, killing or fighting. Director Russ Emanuel and writer Julia Camara craft a bare bones tight suspenseful flick, with just enough information to continue to ask more alternative dimension, and reality questions.

'Occupants' opens innocently enough with couple Annie and Neil Curtis Briana White and Michael Pugliese setting up camera's throughout the house to record and document their commitment to clean living. Of course things go askew when another couple shows up in an alternate reality, and that couple turns out to be them. The highlight in 'Occupants' is the thought provoking and careful acting of Briana as Annie. Although both her and Michael Pugliese had to go through the dual character landscape, Annie had to carry the entire film, not only with dialogue, but every emotion possible, from anger, to happiness, to fright. Look for her star to rise in the coming years.

'Occupants' is basically a single location film, shot in a home. The audience are witnessing the lives of these two characters, and their doppelgangers. This aspect perhaps would have been additionally served by fleshing out one additional couple, beyond the minimal PRI videos. Perhaps a bit of nitpicking, I wanted to see a further scope of field explored, but Russ, in deference to pacing, kept the film tight of focus, which is also fine, but a bit of less impact. Again this is a lower budget film, and the ending is left open and asks more questions. One could assume that this was not meant to be it for the Peterson Research Institute and 'Occupants'.

Look for a fantastic, intuitive,  extended cameo from talented 'Star Trek: Voyager' alum Robert Picardo as Dr. Alan Peterson. He is trying to wrap his mind around the goings on of the mysterious Curtis couple, and attempts to offer advice. Picardo is a pro, he has an amazing realism in alll of his performances, not like acting, more like life. Again would have been cool for them to actually visit with him rather than video, but alas, the budget constraints, I am sure if a second 'Occupants' film, or a series is made this angle will be explored more in depth. There are concepts, not worth spoiling in 'Occupants', so the story will not be further discussed in this early review.

Definitely a no morons allowed film, if one does not like B movies, nor talking based movies, nor sci-fi, films, that raise more questions than answers, 'Occupants' is not for you. Dichotomy balanced in dimensional portals, juxtaposed into semi delusional state, is 'Occupants' in a nutshell. The film is thoughtful, and worth a purchase. Even with minor quips aside, 'Occupants' rates a 7 out of 10.


The film is making the convention Spring-Fall rounds check out this link for specifics:  http://occupantsthemovie.com/news.html