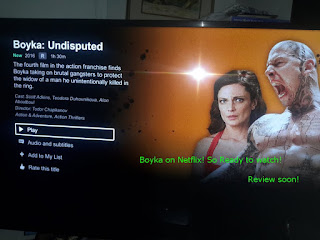 
Greetings valued Dan's Movie Report readers, today Boyka 4 is unleashed on many platforms! I have been very supportive of Mr. Adkins since the early days of my site back in 2009, and his latest effort does not disappoint.

Mr. Adkins has long been an advocate for the action genre, and implores his fans to obviously buy his films. I actually bought his "Most Complete Fighter Shirt" as some money was for charity. I think Mr Adkins is a very powerful force in the action world and Boyka: Undisputed adds a humanistic element to his amazing prowess.

Waxing long, wasting copious words, and more importantly spoiling the plot of films is just not my style. Let the movies do the talking! Adkins last released film 'Savage Dog' represented a huge step in the right direction adding more human story to the bloodbath of carnage.

Boyka: Undisputed opens with Boyka killing a man in the ring after he told him to stay down. What follows is a story of redemption, and personal journey. He seeks out the wife of the man he killed to pay off her debt to the mob. The film did not waste time on sappy love stories yet still manages to allow the viewers to be engaged in the characters. You feel for the wife who owns a center for  underprivileged kids, the human interest story does not need to force a love story to have real impact

I had the fortune of interviewing two prominent people in Boyka: Undisputed long before they were in this film. Nice to see them in action on screen. Please check out my interviews with Tim Man and Brahim

He is forced to fight three fights to pay off the debt but then more is added on, that is kind of the reveal. So I will not spoil the story. What can be said of Boyka: Undisputed is how damn good the action and clear the filming is! We see and feel each hit.The fights are long and well thought out. The execution of the action is a real standout. At times cameras can be too close or too shaky to show the fighting and movements properly, not the case at all in Boyka: Undisputed.

Overall this movie is worthy of a purchase even if you are not into the fight and action films. I wanted to watch on Netflix, as 4k upstream resolution is rather amazing and so clear, anyway you watch it, make sure you do so and continue to support Mr. Adkins and his quest to keep underground action alive.

Overall Boyka: Undisputed rates a solid 8.5 out of 10 it is just that damn good!