Above Banner poster for BBF Girls!


Greetings Dan's Movie Report readers haha, ok this film literally came out of left field, far of left field! To be quite honest, had it not been for my friend Jessica Nam who plays Superhero Lilly, I never would have heard of it! From writer/director Brian Lonano and writer Victoria Cook comes a tale of menstruation, and yeah it is what it sounds like dirty, silly and downright gross, yet beautiful. 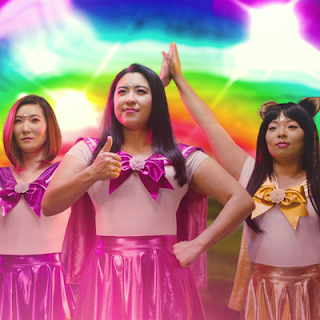 Above: The superheros of BFF girls! Small size, big personality!


Basically you have three young girls who are going through their menstruation periods haha see what I did there? They turn into superheros, played by different actresses who have shall I say unique powers of bleeding pushing people around and selling stuff, ha. This film is not for kids Jessica told me it is aimed at the Adult Swim crowd, I actually see a full length Troma film!

Yes BFF Girls is not for everyone, and the subject matter and exdecution is bound to offend many, but for the core audience it should find a niche I give it a 7 out of 10. Three cheers for bleeding pint sized superheros!