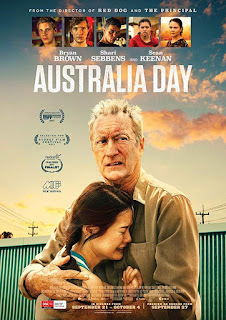 Above: Poster from IMDB page

Greetings valued Dan's Movie Report readers. I must admit, I know very little about Aussie Holiday traditions, but apparently Australia Day is a holiday which actually celebrates the apparent conquering of indigenous people and still divides the nation today. Australia is a huge place, yet with under 30 million total population it has so much land, yet much of it is very arid, the coasts, which are home to most of the population have huge numbers of people, and are a real melting pot of cultures, and thus, there are racial tensions.

Australia Day as a movie makes an attempt to put to light various racial groups and perceptions of them by the 'Blue Bloods' the English. There is use of slang and jargon, which will probably be unfamiliar to the majority of a U.S.A. Audience, yet it does mirror what is happening in the United States. Australia Day has intersecting stories like the U.S. Film's David Cronenburg's Crash, and of course the modern Traffic, yet, feels fresh as new cultural divides are explored, and lives of the characters are made more personal from screenplay writer Stephen M. Irwin.

Australia Day is not a movie inherently for the masses, yet should find a niche market in the west. Strong performances from legendary Aussie actor Bryan Brown who portrays a down on his luck farmer. His leading man influence guides the film and provides a solid focal point. Actress Jenny Wu, plays a Chinese national Lan Chang, who is running, and continues to run, and trust no one. Her performance is great and the fact that she speaks Chinese throughout and subtitles are used adds to it. Young actress Miah Madden goes all out hard as a teenager with a dark secret. A masterful nuanced performance that is far beyond her years. Other strong performances stand out, yet refuse to spill the beans, watch the film and formulate your own opinions.

I refuse to spoil this plot, it is on Itunes and YouTube Red, yet, I do wish at 1.5 hours more time was taken to set up the lives of the characters. We do learn about them, yes, but it is on the fly, that coupled with the copious subtitles in various languages, makes Australia Day a tough one to follow. The action is rife with some standard ideas, yet is varied enough to entertain, again, the rapid fire pace seems to detract from the message and story.

Director Kriv Stenders keeps the pace frantic, and yes it does work and needs to work. The actors are well coached and all have torrid expressions and realize the gravity of what they are doing. I am curious how much of his initial edit was left on the table to the final output of Australia Day. I see a film that is perhaps 10-15 minutes longer in there, yet by picking up the pace, the audience is thrust into the lives of the characters.

Australia Day is a hard film to rate, not a polished as the U.S. Film Traffic, which is one hour longer, and a 50mil budget. I liken it more to the the David Cronenburg 'Crash' based on the novel by J.G. Ballard, of course minus the NC-17 copious sex and violence, yet with appx. the same length and frantic pace. Australia Day should find it's specific western audience of erudite film fest attendees, and art house fans, Dan's Movie Report rates the film a 7 out of 10.