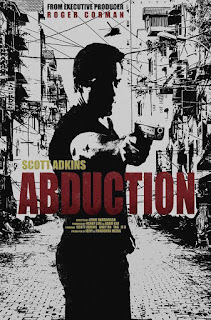 Greetings valued Dan's Movie Report and Action-Flix readers, hard to believe it was almost two years ago when Amazing film producer, actress, singer flew to South Beach to do a live interview and to thank me for submitting her film Truy Sat to a few festivals. She mentioned wanting to collaborate with people worldwide desire to collaborate with passionate people in the action world. Although her and Cung Le did not ultimately decide to work with each other, the idea here is to bring a singular vision to movies shot in Vietnam.

Abduction is the film she mentioned when it was called Twilight Zodiac. With Brahim, whom I have done two interviews with and Truong Ngoc Anh, along with one of my favorite action actors, Scott Adkins. Andy On is another adept action guy, Set as a sci-fi film, Abduction is an interesting twist on a usually very basic action plot. Billed as a Roger Corman presents film, Truong Ngoc Anh and Scott Adkins are listed as the producers as well.

The opening of the film has Adkins wandering the streets, after a fight literally knocks him into a new reality. The film is a lot to take in, To see Adkins not as much as fight, but story. Truong Ngoc Anh plays a doctor trying to get to the bottom of his memory loss. The thing is this is a real dialogue, he is stuttering, ACTING! I want to see this side of Adkins more, I feel this will help him in the long run, Not everything is about the action! Actually if they played the film essentially more like The Debt Collector, character driven it might have worked a bit better,.

It seems like there were several ideas merging in this story. Some of the tech is not that bad, a mysterious man, diamonds, It was pretty hard to follow, but the elements were very different from a typical Adkins film. Has some elements of The Matrix,

I do not want to spoil the plot of this film, guns levitate, the action is more focused. Yes that means slowed down, but, it is kind of interesting! People disappearing into various dimensions, Adkins essentially claiming that his daughter is abducted by aliens. The outer space ones, haha!

So robbery, diamonds, aliens, action, sure to be something for everyone, or for the simple minded, who just want to go from action set piece to another The interplay between Adkins and Truong Ngoc Anh sold it for me, she WANTS to get him acting, not punching and kicking. Truong Ngoc Anh is a good actress, and intellectual business woman. She has particular ideas about her various films including Truy Sat are perceived and and displayed.

My take away from this film, is a side of Adkins, and for that Matter Truong Ngoc Anh is shown, pensive moods, vitriol, and Angst!

Truong plays a capitol role in the film and not going to spoil it! Sort of a secret place, ha but then Adkins gets his memory back, and the fists start to fly!

A really cool thing the action is clear, no silly mood lighting and we can see the action, Apparently a spider device is in control, but the three are seemingly attempting to find out what the hell is going on.

Truong Ngoc Anh tries to get Adkins character by reaching back in his mind to find out what is happening!

I mean I am a huge Roger Corman fan. A strong Adkins fan and Truong Ngoc Anh brings her unique ability. I liken Abduction, to The Matrix, Jacob's Ladder and a psychological horror.

A second watching reveals more, I liked it! Director Ernie Barbarash who did the tremendous Cube films, crafts an unusual story. Tim Man, who recently did Triple Threat and Accident Man with Jesse V. Johnson, once again proves his work ethic and talent are top notch!

Is the film great, nah, as there is many unfinished sub-plots overall, a bit of intellect is good in Abduction, Grasping at straws at times, but helps to grab your attention for 97 minutes. The film is currently making the screening rounds, Abduction rates a 7 out of 10. Incidentally Henry Luk and an Antony Szeto from Fist of the Dragon are on board as producers! The other huge take away is Abduction reunites Andy On and Adkins for the first time in 18 years, since Black Mask 2!

Please check out my two earlier interviews with Brahim @  https://dansmoviereport.blogspot.com/2014/08/actor-brahim-achabbakhe-interview.html

2nd interview is for Boyka: Undisputed!

This interview contains the first worldwide discussion on Abduction, as at the time it was not filmed, and called Twilight Zodiac! She asked me connections in the USA for collaboration!

The film is available for pre-order in the USA and releases July 16th.