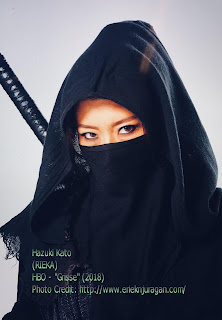 Greetings my esteemed and valued Dan's Movie Report and Action-Flix readers, After binge watching the amazing HBO series Grisse, and watching her various action videos, I knew that Hazuki Kato is someone to watch now and on into the future. She has the skill, look, and demeanor that will take her far in this the film and TV World! The future of action is looking brighter than ever for ladies who are willing to put in the work and time to hone their craft. Incidentally, after I conducted this interview, I recently watched Atomic Eden, another full on action blast featuring Hazuki! Enough of my babbling on, once again time for another exclusive, and fascinating interview on Dan's Movie Report.

DT: Chat about how you decided to begin martial arts training at the young age of 10.

HK: I started Classic Ballet when I was 3 years old. I was very flexible and loved to perform on stage but didn’t really like going to practice. My mother continued to take me to classes until I was 10 years old but one day she told me that I should maybe try Karate because it would fit my personality better. l really enjoyed my first day in Karate class. I was a 10-year-old girl who started Kyokushin Karate in my hometown in Saitama, Japan.

DT: Wow, such an interesting transition. Was there an influential Sensei early on in your training? What are some of the things that he or she said to you that have stuck with you until now?

HK: I have two very influential martial arts sensei in my life.

The first is my very first Karate teacher whom I met when I was 10 years old in Japan, Chikara Takahashi sensei. I was too young to remember what he said to me exactly but at the time, I had no confidence and felt like I was not good enough to do anything compared to my peers. I was very insecure. But I remember Chikara sensei having amazing positive energy and I would gain confidence whenever I go to the Dojo and train karate with him. (I was good at high kicks because of my 7 years of ballet lessons. A lot of flexibility!)

The second is my first Martial Arts teacher in the US, Sifu Ray Copeland from RCSOMA. I met him right after graduating college when I started to take my acting career very seriously. I was so fortunate to have met him. He introduced me to a whole new world of Jeet Kune Do, Muay Thai, Kali, and the philosophy of martial arts.  I became intrigued with the martial arts he introduced me to and dove right in. The martial arts training not only helped me physically, but also mentally by keeping my mind healthy, strong, and positive. If I hadn’t met him, I don’t think I would still be continuing martial arts to this day in the US. Sifu Ray tells me “Don’t think, Feel.” This stuck with me. I tend to think too much and sometimes my body won’t follow. However, I think this applies not only to martial arts, but also to acting. Don’t think, Feel!

DT: I think this is wonderful to give thanks to those who have influenced you. I read and watched videos of you, obviously have trained in various disciplines of martial arts, do you have a preference, one that you enjoy practicing more than others? 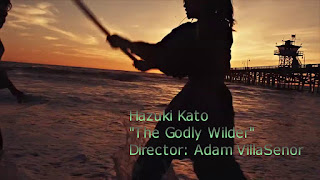 HK: I enjoy Muay Thai and kick boxing the most. I would also like to focus on improving my Japanese Sword fighting skills.

DT: Chat about transitioning from martial arts to acting, and modeling. How did the transition occur? (Schooling, auditioning etc..)

HK: I first started modeling when I was a college student. I then transitioned to acting and action training when I graduated. 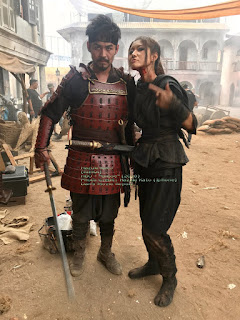 DT: I watched your recent 2019 action demo, it is full on amazing, are you focusing your career on action projects, or does it not matter the show or film, the style?

HK: I’d love to work on action projects as I truly enjoy physical action, however as an actress I would also love to work on any genre such as human drama, comedy, etc…it won’t matter if there is fight scene in it or not. 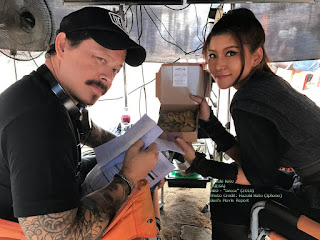 DT: Great to be open to diverse roles. How did you come to audition and have a role in the amazing HBO Asia Series Grisse, which is now on HBO USA!?

HK: I sent my acting tape, action reel, and recent action clips from LA to Singapore.
I really appreciate this opportunity and it was an amazing experience!! 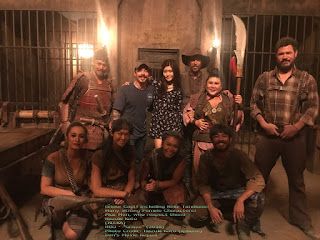 DT: I think the added action tapes were a kick ass idea literally! Describe your character in the show.

HK: My role is a cold-hearted female assassin called RIEKA who is a Kunoichi.
Kunoichi is a female ninja.

DT: Let us chat about what is in the future for Hazuki, new projects.

HK: I am scheduled to shoot a Sci-Fi action film called “Garrison 7” this year. At this moment, I am auditioning for new projects, going to acting class, and continuing my action training in Los Angeles.

I would also love to work internationally such as in Asia or Europe. Actually I would love to work anywhere in the world!

DT: Chat a bit about your modeling career and how you balance it with your martial arts training and skill.

I love martial arts training, and I love improving my action skills so I go to the gym to train my body. That’s my motivation. If I just go to the gym to keep my body looking fit for modeling, I don’t think I would have enough motivation to continue working out every day.

So currently I’m focusing on what I love to do (action/martial arts) and keeping my body fit while doing it so as a result, I can also do modeling. That’s how I balance my two careers. I focus on training, and as a result, I’ll keep a fit body that will enable me to model as well. 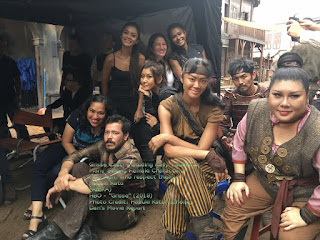 DT: Finally, how about some final thoughts on the recent rise of more Asian characters in films and TV shows. Do you feel that competition for work has increased? How do you set yourself apart and show your individuality in an audition?

HK: I think it’s awesome! There are definitely more Asian roles in TV and Films these past years and I am grateful for this trend. I get called in for various projects that are not only looking for Asian roles but also for “all ethnicity” roles. Shows are now trying to find more possibilities in diverse ethnicities.

Also, when shows look for Japanese specific roles, they now prefer casting authentic Japanese actors. I think in the past this category was very vague and Asian roles were grouped into one Asian category. It didn’t really matter if we were Japanese, Japanese American, Chinese, Korean, Asian American, etc… … we were all put into one single Asian group. I am eager to play various roles, but one of my strengths and uniqueness is that I was born and raised in Japan so I am very Japanese.

I might add that although I’m an authentic Japanese actress, I also have a very strong action type look, so that would be my uniqueness as well. I’m taller and more tough looking than the average Japanese actress. Lol

I also have a very unique “Asian” look that is not bound to any specific Asian ethnicity so I could use that as an advantage to play a wide variety of roles as well.

Though competition may be fiercer, because the acting world is a very competitive industry anyway. I believe that more Asian roles equal more opportunity.

In this competitive environment, I face many rejections every day, but this experience has made me into a tougher individual who believes in herself even more. I am looking forward to continuing this crazy Hollywood adventure!

Thank you so much for this wonderful interview.

DT: An amazing way to conclude an interview! Hazuki, your answers are as illuminating as your talent and personality! I am sure the film and TV World will be seeing more of your work in the very near future. Please connect with her on the following links: