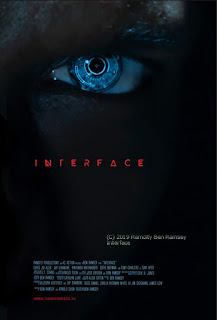 Above: Poster for Interface (C) 2019 Ramcity

Greetings Dan's Movie Report and www.action-flix.com readers, today across my desk comes the completed Interface 30 minute short film. Writer/Director Ben Ramsey tells me that not only has he finished the final edit of Interface, that he has two screenings taking place! The first one will take place on
Thursday October 3rd at the American Film Institute Mark Goodson Theater. The event starts at 8pm! 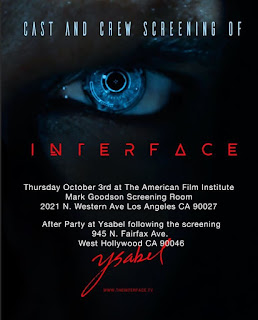 Above: Screening information in LA for Interface!

The second screening takes place at the Urban Action Showcase. The event is at the AMC 25 Times Square Theater. Times and screening information should be posted soon go to www.urbanactionshowcase.com for more information.

In the world of indie sci-fi action Interface stands head and shoulders above the competition. The film actually is more a tease to a possible series or feature, yet feels polished and slick, ready for unveiling to a wide audience.

Chris Jai Alex plays Lazarus, a man determined to undermine the status quo in the dystopia near future of Interface. In the world of Interface there is no TV, no video games, only a direct neuro-net implant that allows the user to experience in real time whatever sensation they desire, from the mundane to the fanatical. Want to eat at a fine restaurant on the other side of the Earth, easy. Want to ski a mountain, or have a lurid encounter, just jack into the Interface. Of course there are downsides, as the users become controlled automatons easily manipulated by others in control of the network.

Of course there is an elite squad patrolling the city. Kinyumba Mutakabbir plays Andre Bakari, an agent in a gang task force assigned to bring in Lazarus. The DCS squad maintains order in high tech levitating and sky patrolling vehicles. Quite detailed CGI work for an indie feature screams a big screen and 4k resolution. 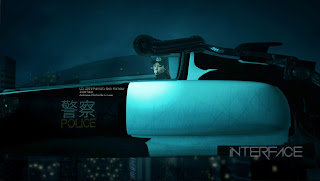 Joining the DCS squad is the feisty Michelle C Lee as Agent Brix. Michelle is a great actress and stunt professional, and not one to shy away from action. Speaking of action actress Sofie Norman is all out insane as the violent Lenora Cree. Sofie plays the hothead agent willing to go into battle. Kudos to Arnold Chon and the team behind the action Interface delivers constant action and scintillating Sci-fi.

Above: Sofie Norman gets bloody in Interface (C) 2019 Ramcity

Lenora Cree gets rough and tumble in Interface. Actually she has to take a beating to even go into the battle!

A tight 30 minutes teases what is next for Interface. The property can go in many directions, from film to episodic TV. Hard R rated properties find a home on Netflix, and Interface screams streaming platform with little restrictions.

Overall this is a spectacular example of what can be accomplished in independent cinema. Interface rates a very strong 9 out of 10. If you live in LA or New York make sure to attend one of the early screenings. Be on the lookout for future updates on new screenings. Watch for exclusives later in 2019 on Dan's Movie Report and www.action-flix.com