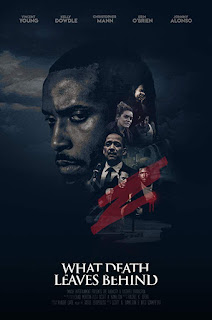 Above: Poster of What Death Leaves Behind from IMDB

Greetings valued Dan's Movie Report readers. Thanks to producer Rachel, I was able to obtain a couple of What Death Leaves Behind: The Kidney. I first heard about the film from actress Erin O'Brien. I must admit, I had certain ideas about this film before I watched it, that said, it is nothing at all like I thought. I kind of was expecting a taught horror, or thriller, instead What Death Leaves Behind is more of a drama, that delivers a perplexing yet interesting yarn about a man who receives a kidney, and the moral and psychological implications. 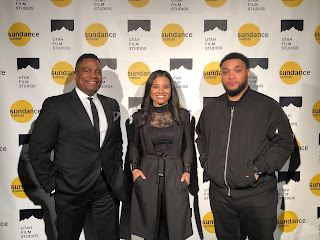 Khalil McMillan  portrays Jake Warren, a man whose kidneys are failing. He is shown going to the dialysis center lamenting his place on the kidney doner list. The list is long, and it is very real sometimes years have to be waited and quite often the person dies prior to getting the kidney or whatever organ is needed.

Jake Warren, tries his hardest to maintain a regular HVAC repairman job, with his wife and child berating the difficulties of dealing with his increasingly difficult life. Christopher Mann, who is in virtually every scene of the film really breathes life into the character. The audience will feel his pain, and the character study in What Death Leaves Behind is quite masterful. 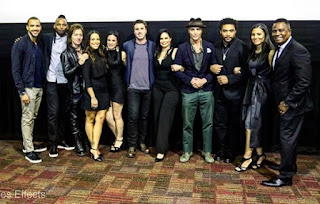 Jake Warren's wife is played with angst and trepidation by Shaira Barton. She feels his pain, yet tries to retain some semblance of a normal life. Shaira really does a nice job, very natural delivery never overacting, just in the moment of her character, a real life study of the people affected by this dire health issue.

Eventually Jake has some reoccurring nightmares, a lucid, yet lurid dream of the people donating the organs meet their demise in horrible ways. What Death Leaves Behind raises many moral questions, yet never preaches the answers, the audience is left to decide the course of action and what is real or what is imagined.

Normally I do not like ambiguous endings yet this one is finite, yet leaves open the various possibilities, were these people really murdered or is it some sick and twisted fantasy, made up for a story of a dying man?

The look of the film and quality of filming is very strong. Obviously this is a lower budget film, yet it never feels cheap. I thought director Scott A Hamilton got his cast to really emote and accent the gravity of the plot. There are no divas and no over actors here. Each person in What Death Leaves Behind is given a character to work with, and stays firmly within the parameters. Dialogue is not overly complicated, yet will leave some questions for the audience to ponder, which is obviously the idea.

Overall, What Death Leaves Behind: The Kidney is not a horror, nor thriller film by any stretch, yet should keep audiences entertained for the 87 minute length. I feel that the film's rating should be an 8 out of 10, just make sure that prior to watching it, you know going in that it is a drama.

Rachel, the producer informed me that the film is currently doing a limited theatrical run in various cities, please point your browser to:  https://www.whatdeathleavesbehind.com/in-theaters/

Join the film makers in Miami for a theatrical screening of What Death Leaves Behind October 10th at 8:30pm at the Aventura 24 Theater  https://www.tugg.com/events/what-death-leaves-behind-7ppm/checkout

Follow and connect with the film on the official social media pages: