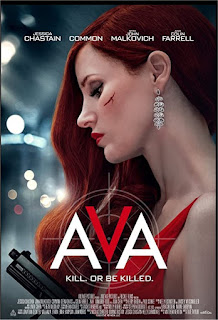 Above: Ava Poster from IMDB

Greetings valued Dan's Movie Report and Action-Flix.com readers. Today I took one for the team. Amy Johnston is perhaps one of the most entertaining stunt woman and action actors working today, aside from being a nice lady. I looked forward to watching the film in which she stunt doubled the talented actress Jessica Chastain, called 'Ava'. Reading up on this film, there was a director change right near production commencing, due to allegations of sexual abuse, never a good sign. Director Tate Taylor did what he could with a terrible script from writer and original director Matthew Newton.

Unlike Olga Kurylenko and the cool film 'The Courier', Jessica Chastain, while a great actress, has no business being in this type of film. She plays a silent but deadly hit woman after a botched hit things go awry, she is hunted by her employers. Chastain is quite attractive, but believing she could mow down half a dozen armed men in a slinky dress is ridiculous. 'The Courier' had action more believable and a far better story, and Olga is far better suited for the action, and obviously went through hard training for the project.

Geena Davis is a bright spot in the film as she plays the mother to Ava, she is sardonic, sarcastic, with her usual caustic tongue. Geena was in a hospital bed for what apparently was a heart attack and says what is the big deal I was having Angina pains! Haha! Cameos from Joan Chen and Colin Farrell were decent, but very brief not adding much to the story.

The story is very basic, so not entirely Jessica Chastain's fault. In spite of the number of adorable and slinky outfits, nothing can save her from a bad film. I really wanted to like it, as I enjoy lone wolf type of assassin thrillers, but 'Ava' unless you wait for free cable, or Amazon Prime, I will have to say pass. Amy though did incredible with the kicks and visceral action!

'Ava' rates a very disappointing 4 out of 10, would have been less if it were not for Geena Davis and Amy's great stunt work, other than that in the words of my good friend Destiny: “NOPE!”

If you desire the film is available for purchase or rent on various streaming platforms.